The Journal of the Traveling Squid

Fellowship, Goodwill and Making Connections Worldwide with Other Squidoo Lensmasters! The Journal of the Traveling Squid is a goodwill project connecting Squidoo lensmasters, particularly Giant Squids of yesterday, today, and tomorrow worldwide. The inspiration for the journey of the traveling squid really originated in the Summer of 2008. At that time, I contemplated how to launch this project of sisterhood and brotherhood for charity; to take my Giant Squid t-shirt, sign it and send it on to the next Squidoo lensmaster.

This is the original, founding lens of The Journal of the Traveling Squid -- which tracked the traveling squid worldwide journey internationally and in the United States. The journey celebrated its anniversary on March 21, 2014. That was coincidentally my 8-year anniversary on Squidoo. The Traveling Squid kicked off its worldwide journey in Jacksonville, Florida and then flew on to Gordon Hamilton in the United Kingdom.

Volume II, the U.S.A. edition was traveling last in California. Volume I left the U.K. after enjoying 6 full months there; stopping off in Ireland and then on to Australia! Volume III, the second U.S.A. edition headed out to Merritt Island, Florida and is looking to travel in the state before moving on.

March 21, 2014, Jacksonville, FL: Relaunch ... We launched the next edition of the traveling squid in the United States in Florida. And, we now have a new lens, The Journal of the Traveling Squid USA. If you are in the United States and want to participate, lensmasters in the U.S.A. sign up here.

Look At THAT Squidoo Giant Squid T-Shirt - The International Edition! OMG, is this not a cool t-shirt? 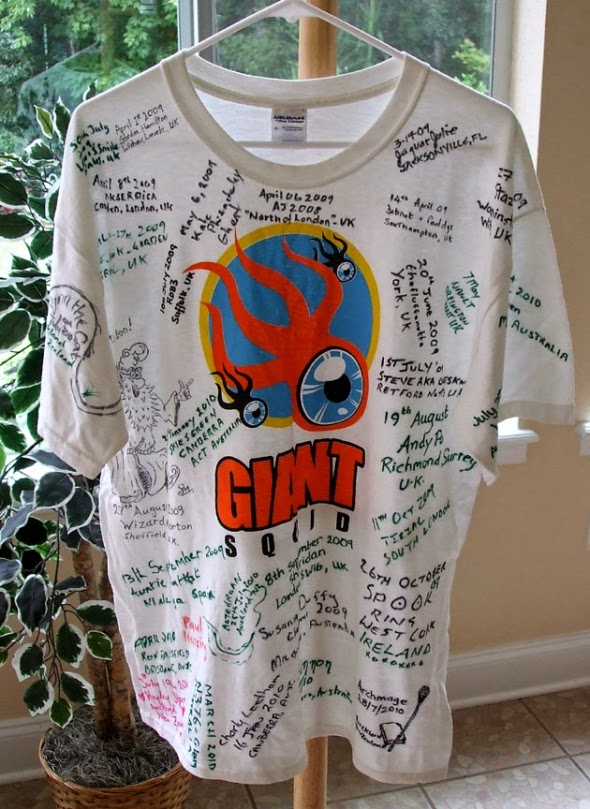 It is our objective to auction off The Journal of the Traveling Squid — signed international edition of the Squidoo Giant Squid t-shirt! This auction is to benefit a Squidoo charity. Once we have determined where the auction will be held, we will let you know. The winning bidder will have the distinct honor of determining WHICH charity will benefit from the proceeds.

WOW! Look at this shirt! Imagine the priceless miles, the priceless experiences, the sheer amount of DNA the shirt has collected in its worldly travels. I tell you, it boggles the mind! Yes it does.

What is The Journal of the Traveling Squid? There is a Journal and a Giant Squid T-Shirt ... 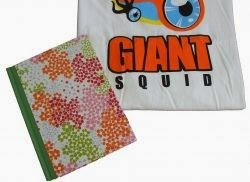 The Journal of the Traveling Squid project consists of the Journal and a Giant Squid T-shirt. As each Squidoo lensmaster receives the forwarded package containing the journal and shirt, they will make their contribution to the journal with a journal entry. And, they will also sign the shirt with their lensmaster name, location and date.

Each participating lensmaster is asked to make a personal journal entry of their choosing. What does Squidoo mean to you? What are you passionate about? What matters to you? Feel free to add a drawing or maybe some poetry. After all, this is your journal entry.

Read on for further information about participants’ participation in this project — 7 things you should know — for participants.

The Journal and the Giant Squid T-Shirt 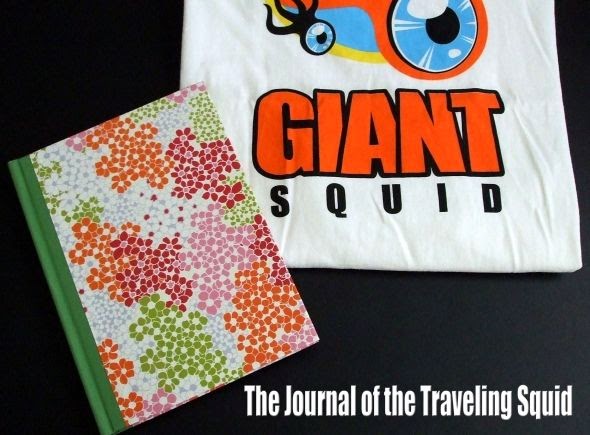 How do you feel about The Journal of the Traveling Squid?
Can such a pay it forward, goodwill / charity project work? Do you believe the traveling squid will make it around the world? A few lensmasters weighed in and this is what they had to say! 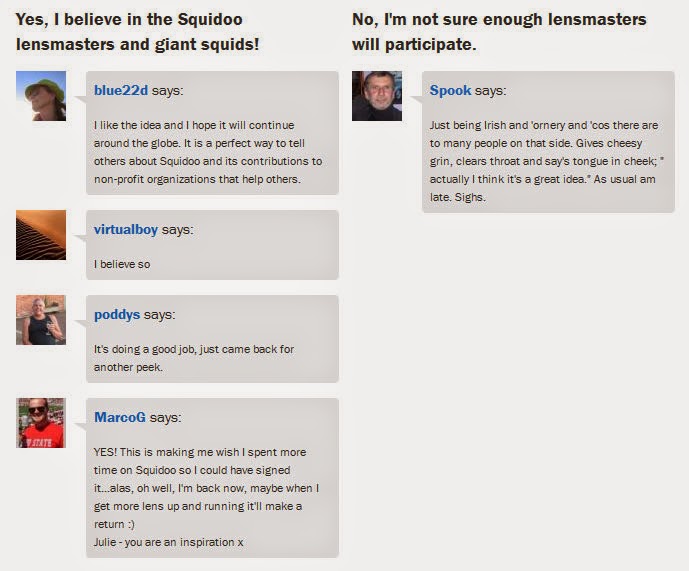 7 things you should know when participating
If you participate in this worldwide project; when you receive the package!

* Add your journal entry: What does Squidoo mean to you? What are you passionate about? Feel free to write a page entry about something that matters to you. Add a drawing or maybe some poetry.

* Photographs please: As shown below, take a picture of your journal entry. Also, we are asking participants to have a photograph taken of themselves holding the shirt and journal next to an interesting landmark close to their location. If there is no interesting landmark, an outdoor picture will work! Pictures should be emailed to JaguarJulie at the email included in the journal. You may also want to upload these to your Flickr acount.

* A donation to your favorite charity is encouraged at the time you receive your package. This part is optional and up to you!

* Please keep me [JaguarJulie] in the loop when you receive your package. You can use the contact me on my lensmaster profile.

The goal of The Journal of the Traveling Squid
The goal of this project is to connect lensmasters worldwide, hoping to travel far and wide — to all continents, and to raise money for charity. Inspired by The Sisterhood of the Traveling Pants, this journey is starting with an idea — with a journal and a shirt. 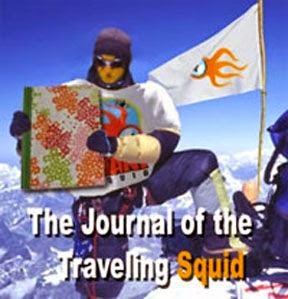 This cool logo was designed by fellow lensmaster Janusz Biela. It was his creation to feature a Traveling Squid wearing the Giant Squid t-shirt, standing atop Mt. Everest holding the Journal! Pretty clever don’t you think. Janusz offers his designing skills free to fellow Squidoo lensmasters — that is mighty remarkable, don’t you think. Thank you Janusz!

Stazjia Jun 05, 2013 @ 4:20 pm - I remember the Travelling Squid so well and followed its progress. I can just about see a bit of my name on the left shoulder, hidden a bit by the fold. I even remember where on the T-shirt I signed it though it was 4 years ago. It was a marvellous, magic idea which demonstrated the Squidoo spirit of the time.

The Journal of the Traveling Squid P1 and P2 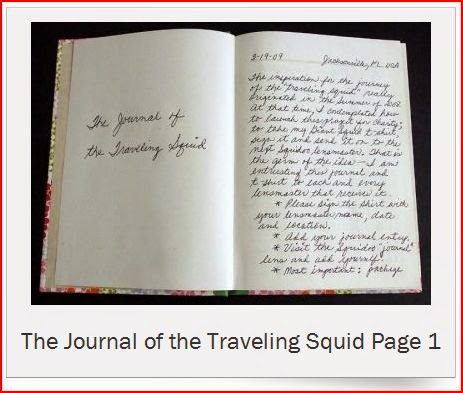 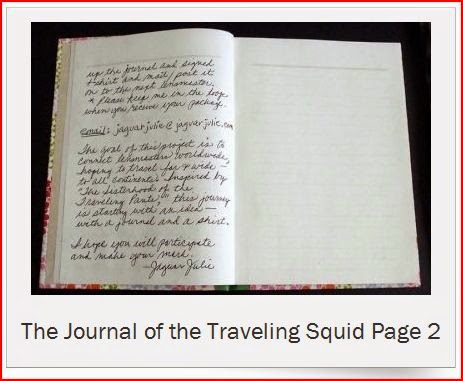 International Edition of The Journal of the Traveling Squid
It flew to the U.K. in March 2009 and has returned to Jacksonville, Florida for a rest period!

Welcome to the International Edition of The Journal of the Traveling Squid! If you are a Squidoo lensmaster who is or will be participating in the Traveling Squid project, and live outside the United States, this is where YOU will be found. This page is highlighting the journal entries and landmark pictures of participating Squidoo lensmasters internationally. We started off the International Edition in March 2009, and here we are, one years later and still going strong!

The Journal of the Traveling Squid is a goodwill project connecting Squidoo lensmasters, particularly Giant Squids of yesterday, today, and tomorrow worldwide. 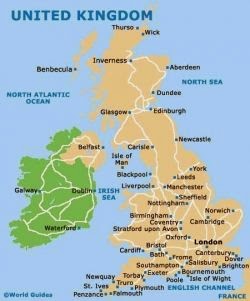 The Journey in the U.K.
Continuing throughout the U.K. connecting so many lensmasters and giant squids. Gordon Hamilton has ‘made his mark’ on the Volume I U.K. journal and t-shirt in March 2009. Some six months later, the journal had visited 17 lensmasters in the U.K.! That’s pretty remarkable.

Once all willing lensmasters located in the U.K. have participated in the journey, the journal and t-shirt will be ready to make its way out of the U.K. into Ireland and then into Europe for an Eastern journey around the world!

Oh, did you read that we started a second volume of the traveling squid on Seth Godin’s birthday??? July 10, 2009, the journal departed Jacksonville, FL headed to our very own Gil. Now it is September, and Volume II is underway in the U.S.A.

Hello to my fellow lensmasters, Squidoo you all, who reside in the United States of America! Woo-Hoo you all. I am so glad to have connected with each and every one of you to celebrate the traveling squid in America. It was truly fabulous to actually have the important folk of Squidoo — let’s see, Gil Hildebrand, Kimberly Dawn Wells, Corey Brown, Seth Godin, Megan Casey … did I miss any of the HQ gang? How awesome it truly was to have these fine Squidoo people participate in The Journal of the Traveling Squid? Yes indeed. And, it has been a true honor to be involved with Squidoo, speaking for myself.

Thank you hugely to the fine U.S.A. lensmasters who lent their time and talents to the traveling squid. Hugs you all. 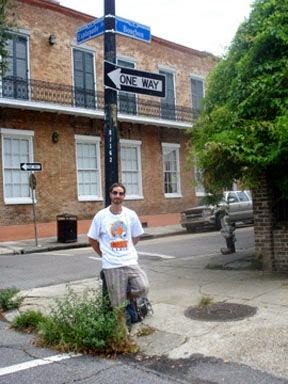 Wawaweewa! I’m delighted to be the second Squid to sign the US journal. For the collection, I’ve taken two photos – one at work and another at play.

In the photo at my desk I am hacking away, most likely on a lensrank bug or our new modules as pages project (hope you like it).

In the other photo I took the journal to my home town: the European-inspired, laissez-faire city of New Orleans. After walking around the French Quarter all day, I made a pit stop to take this photo on the corner of the famous (or is it infamous?) Bourbon St. before making my was to Port of Call, home of the best beef and portabello burgers in town.

Before I go I want to say thanks to all you fantabulous lensmasters for using Squidoo. We’ve created something special here, and I’m thrilled to work with such a talented, eclectic group of writers and marketers. Keep on rockin. ~ Gil aka giltotherescue 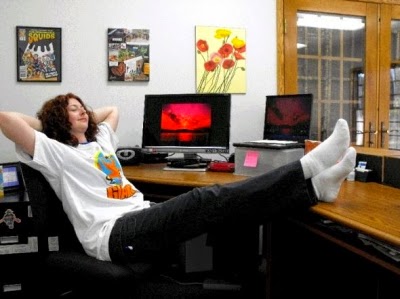 When I started doing web design in 1997 I never dreamed a service like Squidoo would become available and make the process so simple; nor did I ever guess I’d one day be part of the team running it!

In my photo I’m multitasking – kicking back in my office between a long day of coding and writing and preparing to be on ambulance call for the night.

The potential of Squidoo has only begun to be tapped. Every day lensmasters surprise us with new ways to collect, share, and archive information through their creative use of lenses. Keep up the great work, and keep working hard on what you are passionate about. ~ K. D. Wells 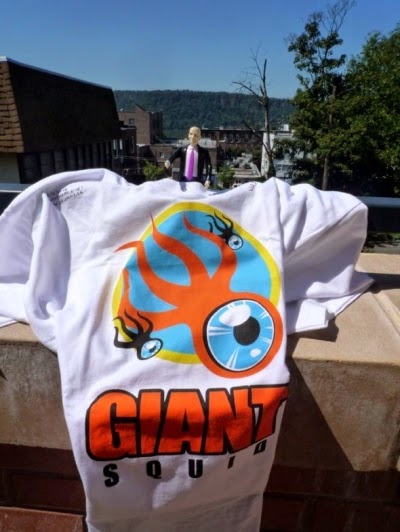 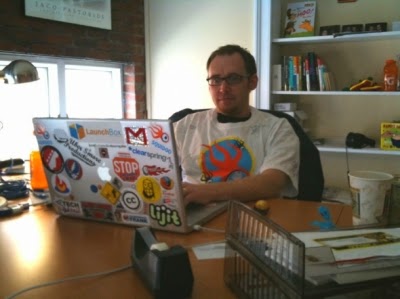 The traveling squid has made its way to historic old town Winchester, Virginia, in the beautiful Shenandoah Valley.

I’m sharing two pictures … the first is one of me in front of The Bright Center, where we have a coworking location. The second is me hard at work, reading an email from Blake on something Squidoo-related and coming soon.

Thanks to all the Squids for all you do. You’ve made this platform better than we could have imagined. ~ Corey Brown

What is your pet charity? Do you actually work with a charity? Me? Well, yes I do! My pet charity is First Coast No More Homeless Pets often known as FCNMHP. Funny when I spell that out, I have to repeat the words to get it right. My journey with FCNMHP started in October 2003 and I’m still going strong with this fine charity even today … as we speak.

The mission of First Coast No More Homeless Pets (FCNMHP) is to eliminate the killing of dogs and cats in our community through free and low-cost spay and neuter programs.

So, let’s pony up and do our part in the charitable donations department. It will feel good — go ahead; try it; you’ll like it. Charity begins at home! Your home.

Thanks Squidoo for the Memories!!

giltotherescue Mar 22, 2010 @ 11:52 am - I love browsing this lens from time to time to see where the traveling squid has gone next. Reading about so many passionate lensmasters all over the world is inspiring.

History: The Journal of the Traveling Squid was originally created on March 21, 2009. On June 25, 2009 this lens earned the Purple Star Award for quality content. Highest lensrank ever achieved: #14 overall. This was a top lens with 65 days on the Top 100 list. Lens #412 in the quest for Giant Squid 500 Club.
Posted by Julie Ann Brady at 1:37 PM