According to legend, kissing the Blarney Stone endows the kisser with the gift of great eloquence! Did you know that the Blarney Stone is actually a block of bluestone built into the battlements of Blarney Castle which is located in Blarney about 8 km from Cork, Ireland? 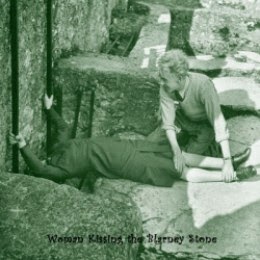 To me, kissing the Blarney Stone is a must for every truly-green Irish person!

I personally am not Irish, but my ex-hubby is Scot-Irish and he can surely weave a great tale of Blarney. So, I'm dedicating this lens to him and to all ye out there Irish folk!

P.S. A big wet juicy kiss for the Scot-Irish gorgeous lensmaster who nominated this lens for that purple star. No, it wasn't me! ;) xoxoxo Welcome to the fabulous bluestone kissing stone known as Blarney Stone! Erin go bragh and Happy St. Patrick's Day everybody.

So, if you have the opportunity to kiss the Blarney Stone, I wish you well. And, may I suggest you hoist a bit of green beer this year in celebration of St. Patrick's Day!

Have you kissed the Blarney Stone?

According to legend, kissing the stone endows the kisser with the gift of gab great eloquence or skill at flattery. Kissing the Blarney Stone on Saint Patrick's Day! Now, that would be the ultimate Irish, green thing to do don't you think! I imagine many have actually accomplished this.

The Blarney Stone IS Bluestone

Bluestone is an evenly-bedded product which tends to exhibit natural horizontal clefts allowing it to be removed in large flat sections suitable for flagstone and curbing, et. al. Did you know there are actually bluestones also at Stonehenge that were placed there in 2600 BC?

The Power of the Blarney Stone

There is a stone there,
That whoever kisses,
Oh, he never misses
To grow eloquent.
'Tis he may clamber
To a lady's chamber,
Or become a member
Of Parliament.


Blarney Castle: Its History, Development and Purpose - Blarney Castle in County Cork is one of Ireland's oldest and most historic castles, an ancient stronghold of the McCarthys, Lords of Muskerry, and one of the strongest fortresses in Munster. It is also one of Ireland’s biggest tourist attractions—over 300,000 people visit Blarney Castle each year.

This new book sets the castle in a wider context which includes aspects of social, architectural and local history with particular focus on County Cork, including the history of the area around Blarney, the Gaelic society which built the castle, the function of the castle and the gradual development of the property from a well-defended family seat to a major tourist attraction.

At the same time it sets the castle within a wider context of national history and events. Since the site controlled a natural route to Cork City and was at the very edge of English Rule in Ireland, there is a relative wealth of extant documentation. Thus the book uses the evidence of both the building itself and of historical material to interpret the castle.

Possible origins of the Blarney Stone

The proprietors of Blarney Castle list several alternative explanations for the origins of the Stone and its supposed powers, all of which suppose that the Stone had previously been in Ireland but was then taken to Scotland and returned to Ireland in 1314: 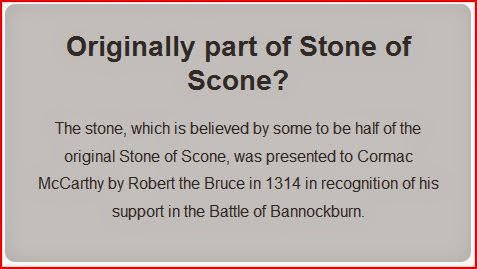 Originally part of Stone of Scone?

The stone, which is believed by some to be half of the original Stone of Scone, was presented to Cormac McCarthy by Robert the Bruce in 1314 in recognition of his support in the Battle of Bannockburn.

Queen Elizabeth I and a "lot of Blarney"

Queen Elizabeth I wanted Irish chiefs to agree to occupy their own lands under title from her.
Cormac Teige McCarthy, the Lord of Blarney, handled every Royal request with subtle diplomacy, promising loyalty to the Queen without "giving in".

Elizabeth proclaimed that McCarthy was giving her "a lot of Blarney", thus giving rise to the legend.

A piece of the Blarney Stone in Lubbock Texas?

There is a missing piece of the Blarney Stone (a 'V' shaped gouge on the bottom) that has turned up and is a fixture in the Engineering Building at Texas Tech University in Lubbock, Texas.

Travel to Ireland to Kiss it Yourself!

Ireland (Eyewitness Travel Guides) - Learn about Ireland's profound cultural heritage, breathtaking scenery and famous easy-going lifestyle with Eyewitness Travel Guide. The opening chapter Introducing Ireland maps the country and sets it in its historical and cultural context. Each of the seven regional chapters plus Dublin Area by Area contains descriptions of the most important sights with maps, pictures and illustrations.

Hotel and restaurant recommendations can be found in Travelers Needs. The Survival Guide contains practical information on everything from telephone system to the transport both in the Republic and in Northern Ireland.

The DK travel guide helps you to get the most out of your trip to Ireland, providing expert recommendations as well as detailed practical information.

Thanks for visiting!
Are you Irish by chance? Ever kissed the Blarney Stone or know someone who has? I'd love to hear about it!

History: Blarney Stone was originally created on Squidoo by JaguarJulie on February 2, 2008. Erin go Bragh! On March 4, 2010 this lens earned the Squidoo Purple Star Award for quality content. On March 17, 2011, St. Patrick's Day, this lens was an official Lens of the Day selection! Highest lensrank ever achieved: #50 overall. This was a top lens with 20 days on the Top 100 list.Lens #281 in the quest for Giant Squid 300 Club.
Posted by Julie Ann Brady at 8:20 AM