I have been known as JaguarJulie since the Jaguars first came to Jacksonville, Florida. I am retired from the corporate brick and mortar world. Can you believe that? I gracefully transitioned into retirement, looking to make some meaning of my golden years.

Writing and editing are two core loves of mine; along with creating unique and clever product fact sheets, product labeling, and newsletters.

From March 2006 until September 4, 2014, I wrote a wealth of content through Seth Godin's Squidoo site. As a Squidoo lensmaster, I authored over 850 lenses on a wealth of topics including food and cooking, home and garden, health and medical, historical and genealogical, and lots more. I honed my skills in writing and editing, creative concept development, social media, search engine optimization, affiliate marketing, and brand ambassadorship.

On August 15, 2014, Seth Godin announced that HubPages had acquired key content from Squidoo and we lensmasters would become Hubbers or Hubsters, depending upon how you look at it.

Then, on September 4, 2014, my remaining 100 Squidoo lenses were transferred to HubPages as hubs in my Julie Ann Brady HubPages account. After the transfer, I began moving over half of my hubs to my two blogs, Blondes that DIY and Jaguar Julie Blog On. At 6:30pm on October 3, 2014, I deleted the remainder of my hubs! At 9:40am on October 30, 2014, I officially closed my HubPages account. Done with HubPages, I AM! If it wasn't for that acquisition of Squidoo content, I never would have been there in the first place - not my cup of tea.

In October 2004, I formed my own marketing company, Jaguar Julie Designs with its own website. I had a professional website for my online brand of Jaguar Julie for nineteen years until I removed it in September 2016.

From January 2007 through January 2011, I was the Marketing Director of a printing chemicals start-up company which "spun off" from FujiFilm Hunt. Nova Pressroom Chemicals reached some $7.5 million in annualized sales, if not more, during the course of my relationship with them. Previously, for 4.5 years, I was the Marketing Manager for FujiFilm Hunt in Orange Park, Florida.

Google Blogger ... I am a blogger with four very distinct blogs.
Social media ... Yes, I understand the intricacies of social media and how you can harness the power for yourself and for your brand. I've been on the internet since the early 1990s!

Words I live by ... Be the best that YOU can be! We're all individuals, truly unique in our interests and abilities. Don't try to be ME or anybody else other than your own true self. Don't be a Copy Cat. 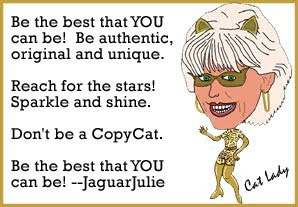 Favorite Quote ... 'I would rather that my spark should burn out in a brilliant blaze than it should be stifled by dry-rot.' –Jack London

Zazzle Stores ... I have a very special store on Zazzle that showcases my personal floral photography - check out Jaguar Julie Flowers - it's a cut above the rest. And, Jaguar Julie Designs is another Zazzle store that showcases a eclectic variety of my designs and decor. I also opened a store for Shirts With a Bit of An Attitude to complement my Squidoo lenses. The store blossomed into quite a variety of Attitude Shirts!