Made in Czech Republic

Made in Czech Republic : You May Be Surprised! Art glass, crystal, glass beads, pottery, china! Glad you found time to stop by today folks! 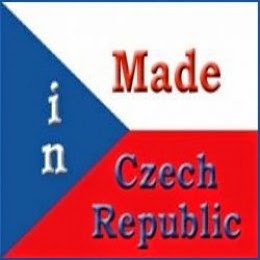 It's art glass, crystal, glass beads, pottery, china and a 16" amber glass fishing float, of all things! It's Bohemia Crystal, Puma, and Royal Dux! I hope you enjoy your visit today. Thanks for dropping by.

By the way, YOU may be surprised. Check out my "Made in" series of pages. Made in Bulgaria, Made in Czech Republic, Made in Hungary , Made in Poland, and Made in Romania.

The "expected" for items "made in Czech Republic" is #1--Czech glass! How many times have you seen jewelry that says it's Czech glass beads? Probably more times than you realize! In addition to the glass in jewelry, there is the Czech glassware.

Following the First World War, the closely related Czechs and Slovaks of the former Austro-Hungarian Empire merged to form Czechoslovakia.

During the interwar years, the new country's leaders were frequently preoccupied with meeting the demands of other ethnic minorities within the republic, most notably the Sudeten Germans and the Ruthenians (Ukrainians).

After World War II, a truncated Czechoslovakia fell within the Soviet sphere of influence. In 1968, an invasion by Warsaw Pact troops ended the efforts of the country's leaders to liberalize Communist party rule and create "socialism with a human face."

Anti-Soviet demonstrations the following year ushered in a period of harsh repression. With the collapse of Soviet authority in 1989, Czechoslovakia regained its freedom through a peaceful "Velvet Revolution."
On 1 January 1993, the country underwent a "velvet divorce" into its two national components, the Czech Republic and Slovakia. The Czech Republic joined NATO in 1999 and the European Union in 2004.

The History of the Czech Republic

Historical books on Czech Republic:
A History of Slovakia: The Struggle for Survival. I have this book! This classic book offers the most comprehensive and up-to-date history of Slovakia, from its establishment on the Danubian Plain to the present.

While paying tribute to Slovakia's resilience and struggle for survival, it describes contributions to European civilization in the Middle Ages; the development of Slovak consciousness in response to Magyarization; its struggle for autonomy in Czechoslovakia after the Treaty of Versailles; its resistance, as the first Slovak Republic, to a Nazi-controlled Europe; its reaction to Communism; and the path that led to the creation of the second Slovak Republic.

Now fully updated to the present day, the book examines the vagaries of Slovak post-Communist politics that led to Slovakia's membership in NATO and the European Union.

The Coasts of Bohemia: A Czech History - Sayer describes how Bohemia's ambiguities and contradictions are those of Europe itself, and he considers the ironies of viewing Europe, the West, and modernity from the vantage point of a country that has been too often ignored.

The Coasts of Bohemia draws on an enormous array of literary, musical, visual, and documentary sources ranging from banknotes to statues, museum displays to school textbooks, funeral orations to operatic stage-sets, murals in subway stations to censors' indexes of banned books.

Sayer shows that Bohemia has long been a theater of European conflict. It has been a cradle of Protestantism and a bulwark of the Counter-Reformation; an Austrian imperial province and a proudly Slavic national state; the most easterly democracy in Europe; and a westerly outlier of the Soviet bloc.

Under a Cruel Star: A Life in Prague 1941-1968 - Heda Margolius Kovaly's steady gaze at the lives caught up in Czechoslovakia's tragic fate under the Nazis and then during the Stalin era illuminates the chaotic life of a nation.

Kovaly was deported to concentration camps, escaped from a death march, nearly starved in the post-war years, only to be shattered by her husband's conviction (in the infamous 1952 Slansky trial) and his execution.

Resonant with lyricism, this gripping memoir is uplifting even in the midst of horror.

Thanks for visiting!
Have you had the opportunity to visit the Czech Republic or Prague? Do you have any special travel stories that you would like to share or recommended places to visit? I hope you have enjoyed my article and found it informative.

History: Made in Czech Republic: You May Be Surprised was originally created on Squidoo by JaguarJulie on August 27, 2007. Highest lensrank ever achieved: #1,343 overall. Lens #86 in the quest for Giant Squid 100 Club Charter Member 2007.
Posted by Julie Ann Brady at 8:11 AM