The Journal of the Traveling Squid USA

The original first edition hit the road on March 21, 2009, departing from Jacksonville, Florida, and arriving in the United Kingdom. After a jolly old time there, it traveled on to Ireland and then went down under to Australia and New Zealand before returning home.

The second edition hit the road on July 9-10, 2009 in the United States of America, connecting with a number of key Squidoo HQ people before venturing on to connect with giant squids in California. There were so many lensmasters and giant squids who wanted to participate that we decided to launch edition three on March 21, 2014. They say the third time is the charm, you know?

The Traveling Squid Project in a Nutshell

Folks! It is important that I don’t repeat myself … you know, I like to keep it original. I believe you should be the best that you can be and be authentic. But, don’t proliferate the internet with duplicate content!

#1 – I think it is important that you first acquaint yourself with the original project, The Journal of the Traveling Squid. There are so many cool people who were apart of the two editions. You’ll see their wonderful pictures and fabulous original content that they penned for their journal entries.

#2 – If you want to be a part of the United States Volume III edition, it is easy to sign up! Please add your lensmaster profile link here!

#3 – Take a moment to read, 7 things you should know when participating.

#4 – When you receive the traveling squid package, sign the USA participant guestbook.

Basically, the project consists of a giant squid t-shirt that you will sign with your lensmaster name, location, and date. Then you pen your own personal entry in the journal. Next, you travel to some local landmark and capture photos of yourself with the t-shirt [and journal if you like]. Lastly, and completely optional, you can record your personal experience in a travel lens!

When you have completed your contribution, you send me the pictures so that I can add them here, along with some information on your experience. You can also transcribe your journal entry and send that to me.

Participants in Volume III in the U.S.A.
Who have actually RECEIVED the project. We are logging date the package is received here! For those lensmasters who reside in the U.S.A., who are participating in Volume III. When you have received your package, be sure to sign in and add the date received along with your favorite charity.

We had three participants in the relaunch of the Traveling Squid USA. Then, Squidoo announced the acquisition of key content by HubPages!! 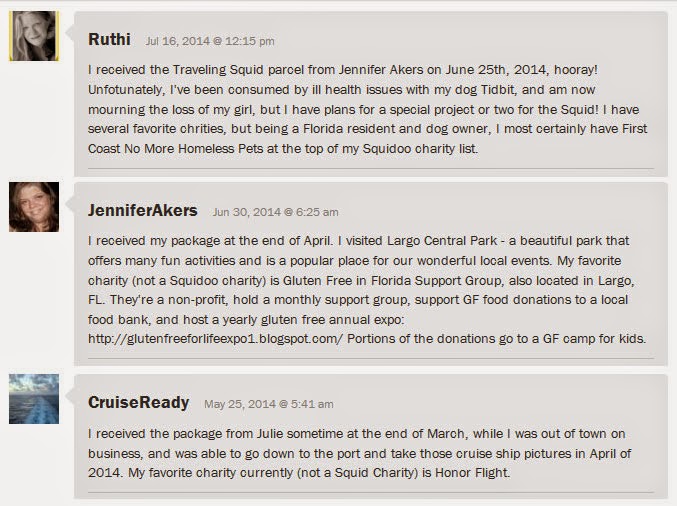 Ruthi Jul 16, 2014 @ 12:15 pm - I received the Traveling Squid parcel from Jennifer Akers on June 25th, 2014, hooray! Unfotunately, I've been consumed by ill health issues with my dog Tidbit, and am now mourning the loss of my girl, but I have plans for a special project or two for the Squid! I have several favorite chrities, but being a Florida resident and dog owner, I most certainly have First Coast No More Homeless Pets at the top of my Squidoo charity list.

JenniferAkers Jun 30, 2014 @ 6:25 am - I received my package at the end of April. I visited Largo Central Park - a beautiful park that offers many fun activities and is a popular place for our wonderful local events. My favorite charity (not a Squidoo charity) is Gluten Free in Florida Support Group, also located in Largo, FL. They're a non-profit, hold a monthly support group, support GF food donations to a local food bank, and host a yearly gluten free annual expo: http://glutenfreeforlifeexpo1.blogspot.com/ Portions of the donations go to a GF camp for kids.

CruiseReady May 25, 2014 @ 5:41 am - I received the package from Julie sometime at the end of March, while I was out of town on business, and was able to go down to the port and take those cruise ship pictures in April of 2014. My favorite charity currently (not a Squid Charity) is Honor Flight. 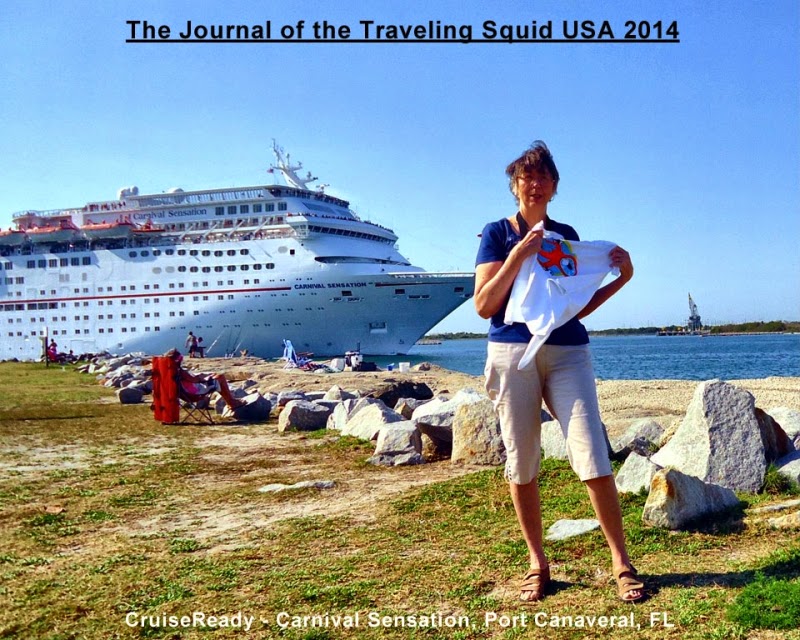 These photos were taken at the edge of the ship’s channel. Both ships were putting out to sea from their home port of Port Canaveral, on their way to The Bahamas. At this point, they are nearing the end of the channel and will soon be in the open Atlantic, where they will turn Starboard, heading south.

Since this is their home port, their voyages begin and end here. Each would have arrived at Port Canaveral before sun up that morning, ending one cruise. That group of passengers will disembark, and the ship will be thoroughly cleaned, restocked, and readied for another couple of thousand cruisers. The new group begins boarding roughly around noon, and the ships leave at 30 minute intervals, beginning at around 4 or 4:30 pm (depending on how many home ported ships are in on that particular day).

The day we were there, two ships sailed. The first one, where you see just the bow, is the Carnival Sensation of Carnival Cruise Line. The second one, the one with the white Mickey Mouse icon on the red funnel, is the Disney Dream, which belongs to Disney Cruises. 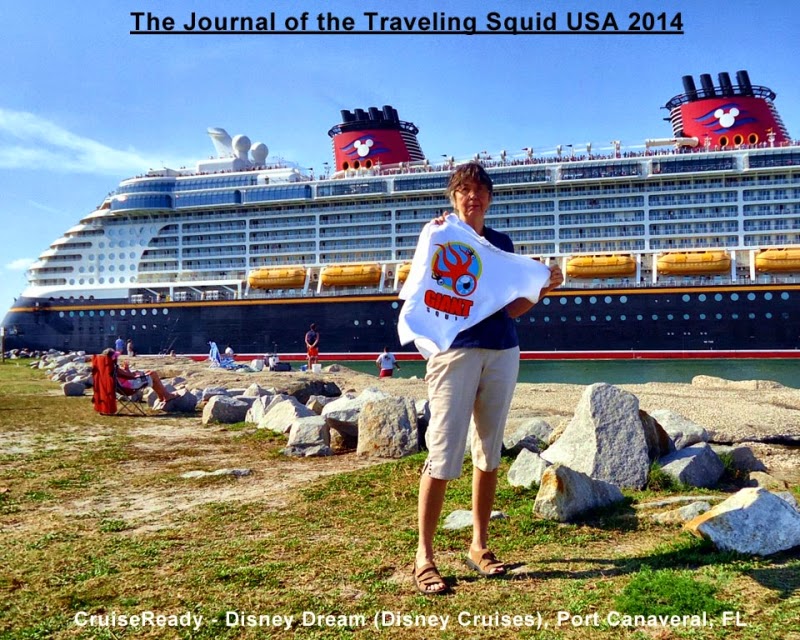 You get a sense of how big these ladies of the sea are when you look at the top deck of the Disney Dream. See how tiny the people look who are lining the railing of the top deck? That’s about the 12th or 13th deck up, I think. And guess what? The bigger ships normally do their turnarounds on the weekends. This was a week day.

I haven’t sailed on either of these ships. We usually sail with Royal Caribbean Cruise Line, which did not have a ship in port on that particular day. Theirs come and go on Sundays (Freedom of the Seas) and Friday / Monday (Enchantment of the Seas).

One really cool thing is that when the Disney ship blows its fog horn to signal it’s leaving port, it sounds very different from most other ship horns. It actually plays a tune – the first few notes of “When You Wish Upon a Star,” whereas all the others just intone a deep, loud EEEEE-OH.

Though it’s WAY more fun to be on board, it’s still a lot of fun to watch the sailing aways… everyone on deck waves like crazy at the people on shore, who wave back, and you can hear the island music playing as they pass. ~ CruiseReady Sheila from Merritt Island, Florida, April 2014. 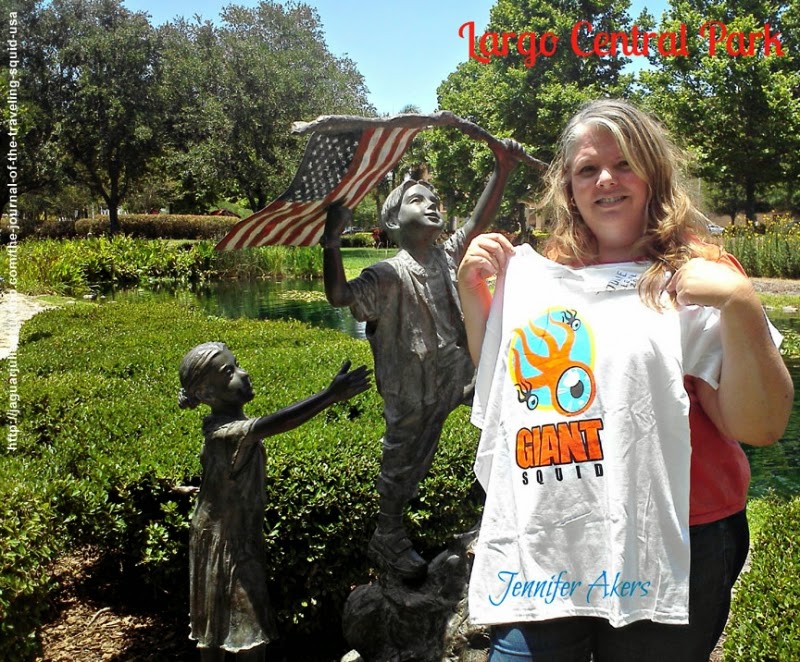 June 20, 2014 – Largo, FL : “I can’t tell you how excited I was to be a part of The Traveling Squid Project! What a heartwarming journey connecting lensmasters across the miles. My personal Squidoo journey started over 7 years ago. How exciting to see my first published lens go live on New Years Day, 2007! I started as a way to express myself, shares things of interest with other curious people.” ~ Jennifer Akers

Stop #3!
The Journal of the Traveling Squid headed on to Carrabelle! Where will it travel next?

History: The Journal of the Traveling Squid USA was originally created on Squidoo by JaguarJulie on May 4, 2014.
Posted by Julie Ann Brady at 1:41 PM