Made in Poland : You May Be Surprised! It's Polish Pierogi and much more! Made in Poland? It's the expected art pottery, lead crystal, amber jewelry, vintage dolls and unexpected designer fashions. 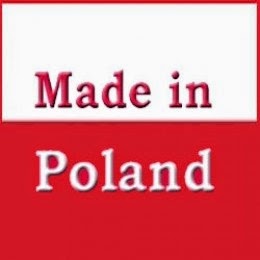 When I was growing up in Northeastern Ohio, I remember all the "made in Japan" or "made in Taiwan" items that were prevalent in our house. I really don't remember so much of "made in China" like you see today, nor did I ever see something that was "made in Poland" except the comfort food Polish Pierogi, potato pancakes or cold beet borscht made by my Polish fraternal grandmother! Oh, and to be Polish was definitely not cool. Things sure have changed, right?

I became very interested in my Eastern European ancestry and began my genealogical research. About the same time, I became fascinated with what designer items I was finding that were made in Eastern Europe!

You may find yourself pleasantly surprised on what cool items you can find that are made in Poland. Allow me to introduce you to some fabulous finds!

Welcome to Made in Poland -- Marc Jacobs, Cambio Jeans, Sophia Kokosalaki and Vera Wang! I hope you enjoy your visit today. Thanks for dropping by.

By the way, YOU may be surprised. Check out my "Made in" series of pages. Made in Bulgaria, Made in Czech Republic, Made in Hungary, Made in Poland, and Made in Romania.

Designer Brands that are Made in Poland

Doing a search of "made in Poland" on eBay resulted in some 1,464 items on eBay auctions and an additional 4,848 items in eBay stores! Personally, I'm rather surprised by that number. To me, it seems a bit higher than I expected. Perhaps, you will be equally surprised when you see what items you can find that are labeled as "made in Poland."

Made in Poland on eBay
Doing a quick search on eBay, it was interesting to note all the variety of items I found to be "made in Poland" and available for sale. Here are a few of the categories and number of items listed.

For 1999, domestic manufacturers of apparel and accessories reported sales worth USD 1.25 billion. This figure accounts for sales of companies with at least 50 employees. Sales for the sector as a whole is likely to be much higher because small to medium sized companies (less than 50 employees) continue to account for strong share of the market. The main Statistical Office (GUS) reported that in the first 9 months of 1999, apparel companies invested USD 40 million in their business. Over USD 20 million of these investments were for machinery, equipment, and hi-tech manufacturing technologies.

In 1999, Polish exports of apparel and accessories were reported to be worth USD 1.8 billion. About 95% of these exports went to European Union countries (EU), mainly Germany, the Netherlands, Denmark, France, and Belgium. The other 5% was broken down into non-EU western countries, mainly the US and Switzerland with 2.6%, and Central and East European countries, mainly the Czech Republic, Russia and Slovakia with 2.4%.

Alice Temperley designer items are quite often "made in Poland"
"Today Alice Temperley is the designer making the biggest waves in British fashion, in a very short time, Temperley has been able to build a business that rivals not only those of her more starry contemporaries but those of older more established houses as well." --US Vogue

Temperley London was launched during London Fashion Week in September 2000 and has quickly grown to become one of the most desirable fashion brands in the world. The company operates three stand alone stores in London, New York and Los Angeles as well as various concessions.

Kenzo designer items quite often are "made in Poland"
Takada Kenzo was one of seven children and developed an interest in fashion through reading the magazines of his sisters. Born in Himeiji City, Hyogo Prefecture, he quit Kobe University to try to become one of the first male students at Tokyo's Bunka Fashion College (Bunkafukuso Gakuin).

His parents did not approve of his career ambitions and he had to work part-time in Tokyo to support himself while he did evening prep courses in design. After some six months, he was finally accepted to the prestigious college and the kind of determination that got him there was to serve him well in the future.

Laura Ashley designer items that are "made in Poland"
Laura Ashley (7 September 1925-17 September 1985) was a Welsh designer. She became a household name on the strength of her work as a designer and manufacturer of a range of colourful fabrics for clothes and home furnishings.

Audrey Hepburn inadvertently sparked the growth of one of the world's most successful fashion and home furnishing companies. Hepburn appeared alongside Gregory Peck in the 1953 film Roman Holiday, wearing a headscarf. As such a fashion icon, she instantly created a style that became popular around the globe. The Ashleys' scarves quickly became successful with stores.

In 1966 Laura produced her first dress for social rather than work attire. The long length silhouette become the Laura Ashley trademark.

Robert Talbott shirts that are "made in Poland"
There are French Cuff, Oxford, Striped and Multicolor shirts!

Greek-born Sophia Kokosalaki is one of London's rising stars in fashion. Her romantic, Grecian-inspired designs are sculptural yet surprisingly futuristic and edgy. Her Fall 2006 ready-to-wear runway show was the largest collection that she has shown in Paris. The success of this most recent show has confirmed her status as an "independent designer with a voice of her own."

In 2004 she was asked to create the opening and closing ceremony outfits for the Summer Olympic Games in Athens - her hometown. Her designs have appealed to celebrities such as Kate Moss and Courtney Love. Her inventive use of textiles and leathers are also evident in her exclusive line for Nine West. The price range for her collection will be $200 - $450. Her line will be available in November.

Lingerie: An unexpected find "made in Poland"
Honestly, I was a bit surprised to find a sexy item to be "made in Poland." It was a Sexy Exotic Stripper Dancer Black Velvet G-String Set.

With a population of 38.7 million (including 19.9 million women), Poland offers a significant and promising market for lingerie. The lingerie market in Poland was worth USD 83 million in 1999 and is expected to achieve USD 86 million in 2000. Most lingerie items sold in Poland are produced domestically, and prices are in the medium to low range. Domestic production in 1999 was USD 181.1 million and is estimated to be USD 121 million in 2000. About 72% of Polish lingerie in 1999 was exported, and the remaining 28% was sold domestically. The same trend appears in the first half of 2000.

In 1999, imports of lingerie amounted to USD 50.5 million, a 9% increased over 1998. The largest suppliers were: Germany and China, 25% each; France, 10%; Italy, 9%: Hungary, 7%: Vietnam and Turkey, 4% each. The U.S. share was very limited, only 0.1% (USD 80.500). EU countries supplied 50% (USD 25 million) and developing countries 41% (20.8 million) of total imports. Similar results are expected in 2000.
The best sales prospects are stretch-lycra/cotton briefs and panties, brasseries, bodysuits, corsets, nightgowns and pajamas. The key competitive factors for suppliers are price, quality, innovative fashion and strong brand recognition. Also very important is market promotion. --www.infomat.com.

Did you know these people were "born in Poland?"
I've extracted a handful of famous or well-known "Poles" from a great list I found that was written and researched by Margaret Odrowaz-Sypniewska, B.F.A.!

Nordic legend says that Amber is the tears of the Goddess Freya and the sun that fell into the sea. The word "Amber" comes from the Greek word "Ambrosia" -- the food of the gods.

Millions of years old, this gemstone is a fossil from the resin of ancient Spruce pine trees of Prussia. Ancient Germanic tribes such as the Goths, other Nordic peoples, Celts, Romans, Greeks, Arabs, Chinese and other peoples valued amber for it's beauty, protection and healing properties.

Amber was also called Electra, Bernstein or Northern Gold due to its electrical properties and golden color and was traded far and wide in the ancient world.

The Slavic Treasures designs took the ornament world by surprise, introducing a new style of free-formed glass ornaments that had previously only been manufactured in Italy. Glenn also introduced some realistic animal designs, another innovation for a glass ornament company. By the year 2000, Slavic Treasures was already acclaimed as a leader in their industry, in terms of style, detail, and execution.

Unfortunately by 2004, Slavic Treasures changed the direction of the company to focus on their collegiate giftware line, thus retiring all non-licensed glass ornaments. --Slavic Treasures

As Zamoyski set out to update The Polish Way, his bestselling first history of Poland, he realized the task required not so much re-writing as re-thinking the known facts well as the assumptions of the past.

The events of the last twenty years and the growth of the independent Polish state allowed him to look at Poland's past with a fresh eye. Tracing Poland's complex development from the Middle Ages to present day, Zamoyski examines the country's political, economic, and military struggles, as well as its culture, art, and richly varied society through the ages, bringing the major events and characters in Poland's history to life.

Are you of Polish ancestry? Do you have any Polish-made items? Are you surprised to see all the items that are indeed made in Poland?

Do you know, that growing up in Northeastern Ohio we heard a LOT of Polish jokes, thanks to that Ghoulardi who hosted the late night movies on Friday's. He was in a white lab coat, wore a funny furry wig and strange glasses. He was always shouting, "Cool it with the boom-booms!" Then he'd blow something up with a firecracker.

I believe he also said that if you were Polish, you usually lived in Parma or Parma Heights and wore white socks and pants that were looking for a flood. Hey, now those are trendy cropped pants and I WEAR them!


History: Made in Poland: You May Be Surprised was originally created on Squidoo by JaguarJulie on August 27, 2007. Highest lensrank ever achieved: #329 overall. Lens #84 in the quest for Giant Squid 100 Club Charter Member 2007.
Posted by Julie Ann Brady at 8:10 AM