Ah, goulash - Hungarian goulash! Do you remember having stew as a child? I hope you liked it! Think of this goulash as a stew, a stew Hungarian style. That is Hungarian Goulash! It sure seems like I ate lots of delicious stew when I was a youngster growing up in Cleveland in Northeastern, Ohio. And, lots of Hungarian foods like goulash too! 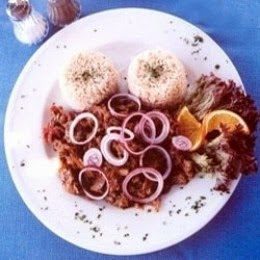 I am eternally grateful to the fond food memories, instilled in me, thanks to my wonderful grandma, Julia Nagy.

Goulash is known as Gulyás in Hungarian. That name originates from the word gulya meaning herd of cattle or cowherd.Where's the beef?

I took this picture of Hungarian Goulash during our vacation to Hungary and Romania. It was actually Made in Hungary, shot in Hungary, and finally eaten in Hungary!

Photo Credit: Hungarian Goulash photographed in Hungary by JaguarJulie and then eaten!

In a nutshell, what is Hungarian Goulash?

Think of American Stew! Goulash is similar to American Stew, but I think, much better! It is a hot dish, originally from Hungary, made of beef, onions, red peppers and paprika powder.

In some regions of the United States, the term goulash can be used interchangeably with hot dish and casserole.

It is most often prepared as a stew and served with boiled or mashed potatoes, polenta or dumplings. ~ Goulash Defined - Free information from Wikipedia Encyclopedia.

Thanks to my grandma Julia Nagy for her traditional Hungarian recipes!

P.S. I was the Official Squidoo Comfort Foods Contributor! Did you know that? Well, you probably guessed it. Hungarian Goulash was one of the first Eastern European comfort foods I got to love ... thanks to that grandma of mine!

Other Hungarian Goulash Recipes
I've selected a few for you to try!
Get a Cast Iron Pot!

My grandma had an old, reliable, cast iron pot something like this one that she used all the time for her Hungarian recipes.

I first heard "dutch oven" from my grandma Julia Nagy. You will get a lot of use out of the Lodge L8DOL3 Pre-Seasoned Cast-Iron Dutch Oven with Dual Handles, 5-Quart. The size is perfect for making goulash or stew. It measures 10-1/4 inches in width and is also made in the USA!

What is different about Hungarian cooking?

What makes Hungarian Goulash SO good? Hungary is known for its exotic, tasty and spicy food and delicious wine. In general, the preference is for rich and spicy sauces, stews and sweets over rather "drier" dishes. In particular, the liberal use of a few special ingredients which give it its own inimitable and original flavor.

These are first of all red pepper, fresh green peppers and tomatoes, sour cream and lard. The use of lard or goose-fat instead of other forms of fat for cooking is traditional and certainly typical but nowadays more and more Hungarians are worried about the cholesterol content of lard, so often other fats are substituted. ~ Hungarian Cooking - What is different about Hungarian Cooking?

Hungarian Cuisine Ingredients
It's in the Goulash! The most well-known specialities of the Hungarian cuisine such as goulash soup along with the different varieties of stew or paprikash are red with paprika. It should be noted that dishes flavoured with paprika need not be hot. In fact, some of the finest brands of paprika are not strong at all.

Fresh green peppers and tomatoes are also frequently used to flavour these dishes, the essence of which is the same: braise any kind of meat in lard/oil with onions, and season it richly with red pepper.

Sour Cream is an essential ingredient in many Hungarian dishes too. It is a basic ingredient of "paprikash" (any kind of meat or just plain potatoes prepared in paprika sauce, to which sour cream has been added), as well as in many Hungarian vegetable dishes and casserole stews.

Facts about Hungarian Paprika
The Goulash Spice - Also known as the pepper fruit.

Paprika, Capsicum annuum, is a sweet-to-mildly hot cultivar of the chile pepper of the family Solanaceae. It is cultivated for its fruit, which are dried and used as a spice or seasoning. C.annuum is a native of South America; however it is cultivated most extensively in Hungary.

The English word was borrowed directly from Hungarian, which in turn borrowed the term from the adjacent Slavic peoples.

Paprika is noted for its high vitamin C content; vitamin C was first isolated by Hungarian scientist Albert Szent-Gyorgyi from Hungarian paprika. He earned The Nobel Prize in Physiology or Medicine in 1937, for his discoveries in connection with the biological combustion processes, with special reference to vitamin C and the catalysis of fumaric acid.

The Albert Szent-Gyorgyi Papers - Read about the discovery of Vitamin C content in Paprika!
Try some Paprika!

I recommend you start with Reese Kalocsa Sweet Hungarian Style Paprika. I'm partial to Hungarian-style paprika, you know? This is Kosher-certified paprika. It has that traditional bold flavor that can add a lot of taste to your favorite chicken, veal, and beef dishes. Give it a try!

I'd love you to take a moment and tell me about it. Thanks!

History: Hungarian Goulash : Ah, Goulash! was originally created on Squidoo by JaguarJulie on March 30, 2006. Highest lensrank ever achieved: #214 overall. Lens #2 in the quest for Giant Squid 100 Club Charter Member 2007.
Posted by Julie Ann Brady at 8:18 AM