What would you do in these circumstances

In a January 9, 2010 blog post, Reflecting on 2009 -- It was a pain-FULL year for us!, I eluded to some of the difficulties that we had experienced over the past couple of years with, of all people, tenants. A little bit of what I had to say six months ago:

It's been a cost to us of some $20,000 plus out of our pockets for non-paying tenants. This has been a really tough "issue" for us as we have not wanted to evict these families, yet we have bills to pay ourselves. It would be too much information to talk any more about these rental matters ... just suffice to say that we are quite charitable people.


You see, I didn't share everything. We went through with only one eviction which ended up costing us a bit more than originally thought. That particular female tenant left us with a messy clean-up and probably not quite $10,000 in total losses. Unfortunately for us, with all the losses we incurred, we still had to pay out of our pockets on our income taxes! That's what I don't get, among other things.

It's pretty doubtful that we can expect to recoup any of those losses from that female tenant as we learned that she also owes a previous landlord about $6,000 for unpaid rent and damages.

Now, talking about that other tenant!!!! Here is where I would pose the question of my readers, "What would you do in these circumstances?"

You see, you really need to hear a bit more of the story to understand all the angst that I am feeling today and why I was unable to sleep much last night and over the past week or so. Last week, I got a phone call from our insurance company for the rental house. I thought that was odd. When I asked hubby about it that evening, he told me "You don't want to know!" Well, YES, I did. It seems the non-paying tenant that finally moved out at the end of 2009, he has secured an attorney! "Huh? I wonder if THAT attorney knows that he owes us over $20,000 in unpaid rent?" I replied. 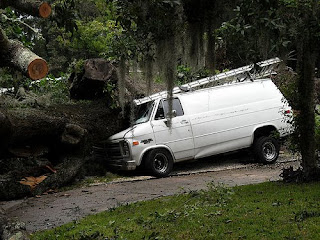 So, for those of you who follow my Flickr photos, you may have seen that big old water oak that took out the tenant's van. There are lots more pictures of that water oak meeting the van and doing damage to the rental property.

It was, I guess, fortunate for us that our rental home insurance did cover the damaged driveway along with the damage to the carport and side of the house. The "proceeds" were nominal, but did help us to pay to have the repairs made. We then dug into our 401k to secure additional funding for fixing the interior of the home, to clean-up after the non-paying tenant.  And, we opted to NOT rent again, but keep the house "empty and clean" so that we can sell it and recoup our out-of-pockets costs AND losses from the non-paying tenant(s).  Hey!  That house is for sale!

I don't know about homeowner's or rental insurance, you know, about why they would not have paid for the tenant's damaged van. My hubby did say, at the time of the damage, that this tenant had NO insurance on his van which was totaled.  That tenant had someone take away his van and was paid some money for the van's tires, parts, and engine.

Well, it appears that said, non-paying tenant has secured an attorney who is now calling us and trying to submit a claim to our insurance company to pay for that van. "Hmmm," I said to my hubby, "I wonder if that tenant has told his attorney he owes us over $20,000 in unpaid rent?"

We have sure heard a lot in the news over the past year or so about tenant rights.  What the heck about landlord rights?  What can we HONEST landlords do about these tenants who are playing the system and going from one landlord to the next and NOT paying rent.  How the heck does that happen?  And, more importantly, how do these PEOPLE [the non-paying tenants] actually live with themselves? Do they have no sense of decency?

"What would you do in these circumstances?"  You know, I really need to bite my tongue these days and not say, "I told you so" to my hubby.  At these times, it is very important that I project understanding rather than personally want to kick the butt of that non-paying tenant.  You know???

"What would you do in these circumstances?" Take ... one, two, three, four!  So, time for a reality check I think?  Yes, let's get a life already!  Failure is NOT an option.  This is no time for tact, you think?
Posted by Julie Ann Brady at 10:58 AM

I've heard real horror stories about landlord's (lack of) rights all the way up to squatters who can basically take over a property and there's little you can do about it. It's a business I couldn't handle. Too often you're faced having to deal with people who've never taken responsibility for much of anything.

I believe strongly in charity, but I don't like to give to people who have no intention of "carrying their weight" to begin with...

I know what I would like to do with tenants like this. It wouldn't be pleasant either...

Hi Christine and Tony! Oh my yes, what to do with tenants like this. It was a really financial blow to us over the course of the last couple of years. First it started with the male tenant occupying our condo rental and then he couldn't afford that and moved into our rental house. That should have been our first indication to let him go for good.

Hubby was so very charitable with him. He even asked me to start a business where we FOUND him work! Oh me, oh my! Next, when he was in the house and not paying rent, he asked if we would consider putting in wood floors. By that time, he had a dog too -- oh, not part of the lease agreement, but hubby let it go.

Next thing you know, we have a female tenant in our rental condo ALSO defaulting on rent and making all kinds of promises. We had her in there for just over 1 year. Aside from the eviction, hubby had to resort to trying to serve her with trespassing papers when the lease had also expired. No rent, but we still had a tenant!

It honestly defies all elements of decency. My hubby is much too much a "nice guy" when they start telling him their "sob" stories ... then we find out, they've done it before ... and are probably doing it again to some unsuspecting landlord.