What is wrong with this picture? It's a copy of the stapled-together 3-part ticket that was attached to a polka-dot dress that I took to the dry cleaners. Having been a seamstress for many years, I've found myself too busy these days to do my own alterations and repairs to clothing. Bright idea: why not take it to the professionals at my local dry cleaner who advertise that they do alterations. 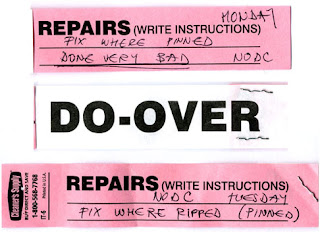 So, I scheduled a trip by the cleaners when I went grocery shopping several weeks ago. I pointed out the seam tear AND the frayed fabric, stating what I thought was the obvious, 'can you stitch the seam AND do something to repair the fraying?' 'Sure we can,' stated the girl behind the counter. At first I thought she might be the seamstress, but she indicated NOT. It was one week and a few days later that I made a scheduled trip to pick up the dress. The same girl removed the dress from the plastic cover to show me the repair. Well, the seam had been stitched, but NOTHING was done to the fraying. 'That's not fixed' I said with a hint of frustration in my voice. 'You're not mad at me, are you?' was the girl's response. 'Mad at you? No, I'm not mad at you, but do YOU think that is fixed?' I asked. So, the dress was left for another week and a few days for rework ...

REWORK: To know me is to know that I come from a background of training as an ISO auditor in the 1990s. Prior to that, I worked for a few companies that bought into the 'zero defects' and 'get it right the first time' principles of business. Then, I went to work for a company that had a 'Rework' department. I'm thankful they didn't ask me to work in that department; I probably would have left sooner than I did.

What's the point I'm making about all this? Simple! Look at that picture again. Do you see that white portion of the ticket? "DO-OVER" is printed in bold letters. Would you want to take something to a company that has pre-printed "DO-OVER" tickets which are used routinely? I wouldn't!

Oh, and the company I work for/with now hasn't yet ordered any of those "DO-OVER" tickets. Thank you very much!
Posted by Julie Ann Brady at 1:32 PM

I can sense your frustration loud and clear...been there, done that. I love this post, Julie, because you've touched on an issue that isn't getting the attention it deserves.