Are Your Tweets Disappearing Into Outer Space?

Have you ever gone back to do a search on your Twitter tweets to find that one particular tweet that you sent earlier in the day, only to find it NOT searchable? Have your tweets been disappearing seemingly into outer space or maybe the Bermuda Triangle?

There has been some discussion recently about certain Twitter members having their tweets not appearing or registering in searches. You can find that Twitter has addressed those issues in their blog.

For me today, there was one particular tweet that I went searching for and could simply NOT locate no matter how I configured my Twitter search. That got me a little concerned! I love Twitter and have been telling every one I meet how much it is such a great resource. Guy Kawasaki, a master twitterer has touted the merits of Twitter at length. Today, Guy Kawasaki stands at nearly 28,000 tweets to my meager 5,300. I wonder if Guy ever considers that maybe not all of his tweets are registering to be searchable.

How did I detect that my tweets weren't registering to be searchable today? It was maybe 1:15pm or so in the afternoon. I had been following @twittyquestions clues for the daily competition. I was zeroing in on the answer with the help of the two clues:

Then along came this clue that cinched it for me: "What do Colbie Caillat, Jesse McCartney, and the Spice Girls have in common?" I knew the answer was "oxygen" as that was a common denonimator amongst those three people!

So, I tweeted my answer: "oxygen #twittyquestions #contest" -- you can see the tweet in the screen capture below which I uploaded to twitpic. 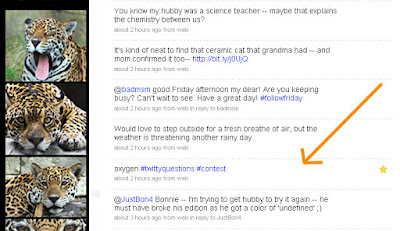 However, when I went back to twitter search to search on twittyquestions, #twittyquestions, jaguarjulie, oxygen -- I tried lots of combinations -- I could simply NOT pull that tweet up in the search results. I tried a number of times, and then noticed someone else came along to play -- first with the answer "water" and then "oxygen" -- that was a full 16-20 minutes after my tweet! Well, by the end of the afternoon, since my tweet wasn't registering in search, the other player got the prize today for the correct answer.

Bah Humbug indeed. Outer space or the Bermuda Triangle coming into play -- whatever happened, don't you wonder if all your tweets, no matter how priceless, are registering?

I'm an optimist I keep telling myself -- I am of the thinking that there will be a reindexing of all the Twitter tweets today and that missing tweet of mine might fall into position! Gosh, I sure hope so.

Does Guy Kawasaki ever notice that he is missing tweets? I'll have to ask him. How about you? Has this happened to you? Oh, say -- wanna follow me on twitter and watch if this happens again. Follow JaguarJulie!
Posted by Julie Ann Brady at 5:19 PM

I mean, it's not so important with MY tweets, but if you compete in a contest it's a whole 'nuther ball o' macaroon! Can't wait to hear what GK says...

Achim, it gives you great pause to think there might be a form of 'censorship' or filtering when all the tweets aren't there! I sure hope this gets rectified to everyone's satisfaction. Gosh, wonder if GK would miss a couple thousand of his tweets?