Julia Nagy -- My Grandmother, My Namesake, My Superhero! If you are a follower of this blog or have possibly been following the Superhero Project at Squidoo, you've undoubtedly seen my lens celebrating the greatness of my own grandmother Julia Nagy. 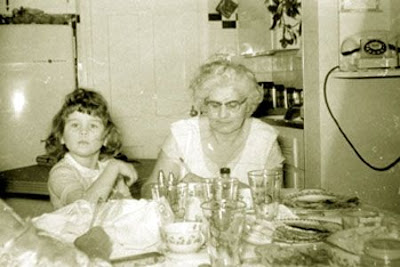 This was my very first Superhero lens as in my life, there has been no greater influence that my grandmother. Grandparents have that knack for being able to contribute so much to their grandchildren that seems to surpass that of our parents. At least I know it was the case for me. Mind you, there is no less love for my mother and absolutely no less respect for her. But, there is just SOMETHING about a person's grandmother! 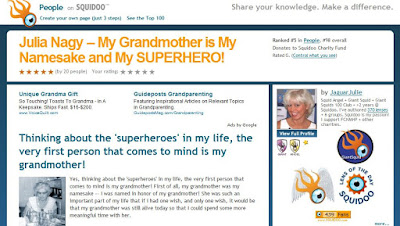 Imagine my pleasant surprise today when I checked on my grandmother's lens to find that it had broken through into the much-coveted lensrank of Top 100, to hit #98 amongst all Squidoo lenses. To me, this means an additional honor to my grandmother of "Queen for a Day!" To get to that particular Top 100 lensranking doesn't just happen! There are a lot of special forces behind the scenes making some magic happen. Great readers and visitors plus some special squid angels bestowing their blessings help lenses to rise in lensrank. Thank you to each and every one of you. Some how, I believe that my grandmother is aware of this special honor. I thank you for her.


My grandmother faced ‘the Dip’ more than once in her rather short-lived life – she only lived to her early 70s, preceded by the death of my grandfather at the age of 67. She faced her first ‘Dip’ early in life at the age of 10 when she was already working to help support her mother and family. Later, and recently married, the Great Depression hit in 1929 – the very year my mother was born. Two years later, along came a second child – My uncle. I’ve heard stories from my mother that my grandmother suffered a nervous breakdown at 28 at which time her hair turned completely platinum-gray. Yet, my grandmother NEVER gave up.

I was in ninth grade when my mother and the 4 kids moved into my grandparent’s 2-bedroom bungalow on Cleveland’s Westside. We all got to know our grandparents MUCH better during that one-year of up-close-and-personal living. Unfortunately, the ‘stress’ of 4 spirited kids probably contributed to my grandfather’s last stroke and ultimate death one year later. Through it all, my grandmother was my superhero. I somehow knew about how hard it was for her to lose her partner, my grandfather. I knew that there were times when she would go down her basement to scream and cry – lamenting her loss.

Years after my grandmother’s passing, my mother and I made a trip to Lily Dale where I had my first spiritual reading. That particular reading gave me some sort of feeling that of the two ‘spiritual’ presences seen on either side of me, my grandmother Julia Nagy was surely one! Ah, the thought to think that she may still be ‘with’ me today. If I had but one wish, oh that my grandmother [and my grandfather] were alive and well today.

My grandmother was a remarkable woman and total inspiration to me. From her, I learned my drive and sense of determination to persevere. She was my namesake and my superhero.
Posted by Julie Ann Brady at 12:16 PM