Since I was a wee lass, I have been enjoying sliced cucumbers prepared a number of ways. I seriously love cucumbers. Undoubtedly, my favorite sliced cucumbers recipe is with some sort of cream sauce.

My grandma used to prepare her cucumbers in sour cream with some vinegar. It was a simple recipe and usually no cucumbers ever were left on the plate!

Holy smokes, but what a fabulous taste! My time is precious, so anytime I can come up with fast and easy recipes, it works for me. 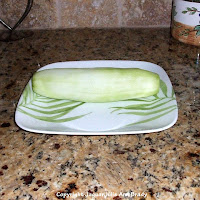 For this recipe, my cucumber measured approximately 8 inches in length.

Finely chop an onion to 1/8" to 1/4" in size. Depending upon how much you like onions, you might add a little more or a little less. I use a healthy 1/3 cup amount. 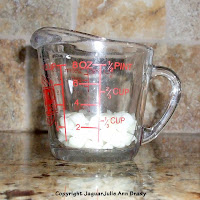 A tip when using Marie's Asiago Peppercorn Dressing: I find that the dressing out of the jar is quite thick so I like to dilute it with a little water to give it a looser consistency. That also helps to dilute some of the calories!

After I have diluted the dressing, I add 3 tablespoons of it to my sliced cucumbers and chopped onions. Blend your ingredients together until the sauce is nicely distributed.

You are ready to serve this fast and easy side dish!

It's amazing how some salad dressings make the perfect sauces for other dishes. People are using them in many creative recipes. I've used a variety of creamy salad dressings when preparing fish - on grilled salmon and on deep fried white fish or cod.

By the way, that plate is actually from the Corelle Bamboo Leaf Square Round 16-Piece Dinnerware Set, Service for 4. A few years back, I bought one of these dinnerware sets from Amazon. When it arrived, I was so taken with the design and style that I quickly ordered a second set. I'm happy to report that I claimed these in the divorce agreement! Yeah. Oh, the plate in our recipe is actually the smaller luncheon plate. I find I will use the dinner plates more often as serving plates because of their bigger size.

P.S. Something I haven't tried since I was a wee lass is to grow my own from cucumber seeds. Now, I think that can kick the taste of this recipe up a notch on the freshness scale! P.P.S. I seriously love cucumbers!
Posted by Julie Ann Brady at 6:32 PM