I am fairly confident that this type of mimosa is the Calliandra surinamensis of the Family: Fabaceae and Subfamily: Mimosoideae. It is also known as Surinam Powder Puff, Pink Powder Puff, Pompon De Marin, Surinamese Stickpea, and Officiers-kwast. It originates in the country of Suriname, in northern South America.

My Pink Powder Puff is now about one year old. The first couple of months, into cold weather, the plant did not achieve the look you see in the first photo above. It was approaching one year of age before it started to look like a dwarf-tree with quite the canopy. Right from the early age, it did have plenty of powder puffs but I don't believe I ever saw the bean-like seed pods until September 2018.

It was the month of September 2018 when I began to see what looked like bean pods sprouting all over my pink powder puff. Some had turned brown and opened. I decided to clip them off, dry them, and harvest the seeds.

Once you start clipping those pods, you realize just how many there are. I originally had only a few that I put on top of a bin in the shed. I couldn't understand a couple of days later why they were lying on the floor of the shed. Then I put the lot of them on a tray on top of the washer ... come back a day or so to find several out of the tray, on the washer, and on the ground.

I was standing outside the shed and could actually hear them POP when they opened up and again they were not in the tray. Just like the Mexican jumping bean!!!

October 3, 2018, it was late in the afternoon, around 5:30pm. I was out in the shed going through the seed pods to pull out those that opened and didn't yet release the seeds and picking up the loose seeds. All of a sudden, I heard a very loud SNAP!!! as one opened up, flew up in the air, hit the side of my left hand little finger and then flew on the ground next to the washer. I have never heard of such a thing ... it was kind of a violent action ... and very very strange. I rather suspected something like that after finding these all askew in the shed and then hearing something yesterday about this time as I was standing just outside the shed with the door shut. Like, WHO KNEW???

October 4, 2018 around 3pm in the afternoon ... I was out checking on how many seed pods had opened ... quite a few ... when they started ferociously SNAPPING. I lost a few that escaped from under the netting and flew off to my left into the shed. I sincerely think these are SNAP PEAS!!

Researching the seeds, I found a reference that tells you how to prepare the seeds for best use. It seems you need to scar them ... one recommendation was with sand paper. So, I think I will grab my emery boards and go to it before I try planting these.

I found a bit of information on how the powder puff seeds should be prepared for planting. Although my variety is not the strigillosa, I believe this information is still applicable.


"Scarify and inoculate seed with strophostyles spec.1 before planting. Scarifying (nicking or roughing the seed coat) seed greatly improves germination, and establishment time after planting. Walker (2005) found that mechanically scarified seed ranged in germination from 74 to 85 percent. Pitman (2009) used sandpaper to scarify powderpuff seed and had similar results. The average percent germination of unscarified seed was 14 while the scarified was 96. In both experiments, physically roughing the seed coat resulted in better seed germination than unscarified, chemical or heat treatments. If scarified seed is unavailable, plant in the fall, and allow seed to over winter in the soil." --USDA-NRCS Powderpuff Mimosa strigillosa

October 3, 2018 at 4pm I had used a sandpaper emery board on 12 of the seeds gathered from the seed pods. I picked up a Jiffy Windowsill Greenhouse seed starter kit to use.

This is the first time I am trying this type of seed starter. It seemed pretty straightforward on the use. Open up the package as shown and then pour 1-1/4 cups of warm water into the tray. The peat pods will swell up.
You can see in the previous photo how the individual peat pods have swollen after absorbing the warm water.
In the next step, you gently open the tops of the peat pods by pulling at the netting cover. For the following step, I used a metal bottle stopper with a pointed-edge to create seed holes about 1/4 inch deep. I carefully dropped only one scarified seed in each hole although the kit recommends 2-3 seeds. I then gently covered the hole with the peat.

It's important to keep your kit covered as shown above. It should be kept out of direct sunlight. I placed mine on the kitchen sink near the outside window ... if I had enough room in the window base, I'd set it there. It is suggested that once you see a seedling that you should prop the cover open. And, once all seedlings have emerged, to remove the cover. You need to make sure you keep the peat pods moist. That's pretty much it ... now it is a waiting game to see if these seeds will sprout seedlings!! Hopeful.


After witnessing many more of the ferociously opening SNAPPING seed pods, I started Googling to see WHY. First reference I found actually talked about exploding seed pods! about "the evolutionary innovation of a fruit wall that can store elastic energy through growth and expansion, and can rapidly release this energy at the right stage of development." 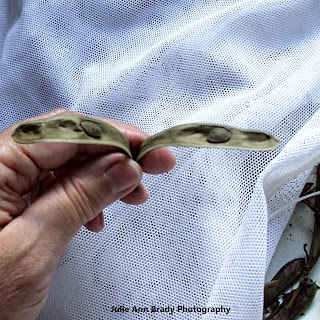 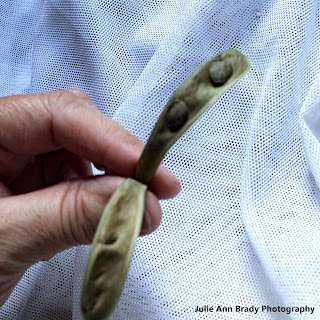 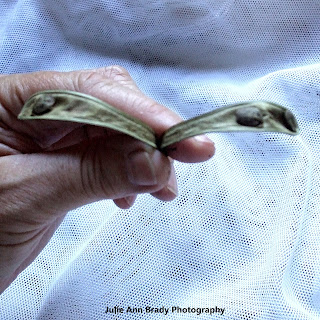 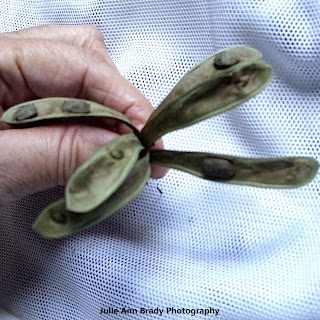 It was a little earlier for me, in the afternoon of October 4, 2018, right around 3pm, when I was out in the shed tending to the seed pods. I had the white netting over them and could see that several had exploded open! At one time, the netting was actually askew from the ferocious nature of the exploding seed pods! I gingerly lifted the white netting cover and then SNAP!!! with such a force, a couple of the seeds pods opened and flew off the tray onto the shed floor. Holy smokes!

In the previous five photos, these were a handful of those seeds pods that fiercely opened or exploded as I was standing in the shed. Looking at each photo, you can see what seeds were still in the pod and indentations where the other seeds flew out. Pretty cool, eh??

HOW MANY PINK POWDER PUFF SEEDS?


Take a look at the circular collection of pink powder puff seeds! I've lost a few into the shed floor, given a couple of the seed pods to neighbors, and still have a few to open. That could easily account for 40 more seeds. I planted 12 seeds in the Jiffy Windowsill Greenhouse. I also left many early opening seed pods on the plant ... no telling how many seeds got shot into the ground ... maybe 100 or so?

How many pink powder puff seeds to you think are in that circular collection? Overall, how many seeds do you think have been produced this year by my PPP plant? Hey, leave me a comment on your educated best guess! I'd love to hear from you.

Here is a morning shot of the Pink Powder Puff plant in my front yard garden! The late afternoon photos will show a more streamlined plant as the leaves seem to fold up for night fall. Pretty, isn't it?


I've decided to try a second-go-around with 12 of the pink powder puff seeds. I had an empty pink egg carton available this morning. I grabbed my nail clipper and gingerly knicked or cut into the sides of the 12 seeds.

Using organic potting mix, I filled the egg carton's twelve spaces. With the metal bottle stopper, I created little pockets in each of the soil-filled spaces. I dropped one knicked seed in each pocket and gently covered with soil.

After thoroughly watering the soil until it was very moist, I covered the egg carton. I've labeled it with today's date and time initiated into the soil -- October 5, 2018 - 11:15am.

To try and speed up the germination process, I have placed the covered egg carton on the outside lower step leading into my Florida Room. At the moment, it is getting some direct sunlight. I've also covered it with a dry dish rag. It should be out of the direct sunlight in maybe 1.5 hours. I will keep checking on it and move it into the shade if necessary!

UPDATE: Well, I hate to admit it, but I gave up on trying to grow the Pink Powder Puff inside. I have seen many a seedling popping up in my front yard garden ... I try to NOT pull them out, but let them be to see if another beautiful PPP might emerge.

In the photo above, you can see a lot of growth on the edges which gave my PPP a drapey look. I decided to give it a bob haircut, so to speak.

My PPP weathered the bit of cold weather we had. I think there really wasn't a Winter to speak of in Leesburg Florida for the end of 2018 and beginning of 2019.

It is now March 2020! My PPP has had no issues with the previous Winter season spikes of cold weather. I can't tell you just how many times I have pruned the PPP to keep it contained within the space in the middle of my front yard. It has gotten so full and high that I need to use a rake to grab the projectiles for trimming. I have gotten so many compliments from neighbors passing by who marvel at the pretty pink powder puffs.

In the March 6, 2020 photo of my PPP you can see how it has taken on a heart-shape! That was not intentional but just sort of happened that way. I had trimmed the plant that morning and came inside to look out my kitchen window to take a photo. A heart is what I saw!!

One week later, on March 13, 2020, I climbed under the PPP and trimmed up about a foot and a half to clear growth from the base. It took a hand saw on a few of the tiny branches down below. I also pulled out the metal edging I had around the base that was put there to support the low-lying branches from lying on the ground.
Posted by Julie Ann Brady at 6:38 PM