Are You Versed in Versed aka Midazolam, Dormicum, and Hypnovel

Are you versed; i.e., do you know a lot about the benzodiazepine class drug Versed which is commonly used as the first drug for inducing a state of sedation and a definite state of amnesia? I didn't know anything about Versed. Yesterday, for the first time, I was Googling "Versa" because I thought that was the name of the drug. I am not the only person who thought it was "Versa" because I found questions about that drug spelled that way. 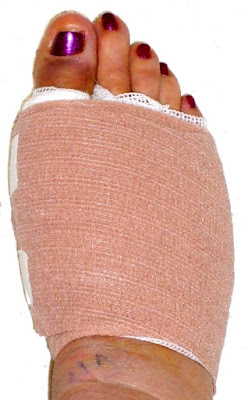 Yesterday afternoon, when I came back from a short rest with my left foot up on several pillows with an ice bag on my leg, I finally hooked into information on Versed, courtesy of my favorite: Google. Why the interest in Versed? Friday morning, July 22nd, I had left foot surgery at Center One in Jacksonville, FL. This wasn't my first foot surgery you know! On April 1st, I had right foot surgery -- sort of the same type of procedure, but the facility was Southpoint Outpatient Surgery.

See my right foot? That picture is from April Fools Day, April 1st -- I'll share my left foot as soon as I get pictures!  Oh, on April 1st, I had a Hallux Rigidus/Hallux Valgus Correction procedure. My foot doctor had me all prepared to receive a joint implant, but I didn't need one.  At Southpoint, I was enjoying the lovely pre-op area with the custom printed drapery with scenes direct from the tulip fields of Holland.  I got to talk with the anesthesiologist and then saw him again when I was wheeled into the operating room.  That was nice too.

HOWEVER, I never got to appreciate the operating room at Center One. Oh, yes I had surgery, but when my anesthesiologist was talking to me in the pre-op, she said they needed to give me some shots in my left foot to prepare me for surgery. AND, she was going to now inject Versed into my IV which would help me to be sedated and would create a sense of amnesia.

FOLKS! That was an understatement. The second that Versed hit my IV and started to creep up my right arm, I couldn't shut-up. "Oh My God!" that's what I had to say. And, I know I said it several times ... probably the last word after that was "in my elbow!!!" Then, from what I remember, I was quiet. I can honestly say in all the pre-op rooms I have visited in my long life, I NEVER had the type of burning sensation that I had with the Versed. I am now obviously wondering: why?

I lost about 2 hours of my visit to Center One. The next thing I recalled was waking up in the recovery room and seeing my doctor. I said HI to him, but he didn't say anything that I remember ... so I'm thinking that I must have been talkative or moaning or expressive in the OR since the Versed, but I don't remember a thing. I do remember my anesthesiologist telling me I would have a Twilight sleep although I got the breathing tube at Southpoint for the same procedure. I'm wondering why the variance from one outpatient center to another.

Gosh, I hope my writing is making some sense today. I think I'm still affected by the Versed, but I'm not sure. At first, I thought this was surely the first time I ever received Versed ... but then I got to thinking. I'll bet I have had Versed in the past, like when I had Morton's Neuroma surgery on my right foot at the outpatient surgery center on Emerson Road, near Dr. Paul Shirley's old office.  Come to think of it, I don't remember what that operating room looked like either!  And, I lost a bit of my memory there.  However, that Versed did not burn like holy heaven when it was introduced into my IV.

So ... today's question ... are you versed in Versed?  Have you ever experienced a burning in the hole that felt like it wouldn't stop?  Did you experience amnesia ... I'm sure you did.  I sure would have liked to check out that operating room as the pre-op and recovery rooms were spectacular.  I was quite impressed with the outside spectacular appearance of the Center One building.  The staff was great.  Myrna was a real gem too.  Heck, I even ran into my OLD neighbor from across the street in Deercreek, Dean [hope Chris will be calling soon.]  Maybe because I am divorced I feel more burning sensations than normal?

I am thinking this morning, that if I have to have a special pre-op appointment with my surgeon to discuss the procedure and things that I need to do ... that I surely would have liked to have a pre-op appointment or brief meeting or phone call with the anesthesiologist.  I'm not keen on drugs you know?  When my foot doctor asked me about a prescription for pain meds, I said I didn't want the typical, in demand, pain stuff.  As of today, the only pain meds that I personally have administered to myself is OTC Ibuprofen.  With that in mind, I sure would have liked the option ahead of time to say YAY or NAY to any drugs which would be administered to me for my surgery.

Have you had Versed?  Did it burn like crazy?  Did you get to see your operating room?  I've got lots of questions for my foot doctor.  I see him Monday evening.  "Hey doc, what was I like in the operating room?  Was I totally out?"  How about that Versed?
Posted by Julie Ann Brady at 10:45 AM