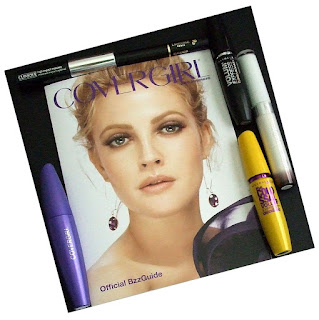 Speaking for myself, I initially thought, "well it is about time!" when I heard that there would be a BzzAgent campaign for a mascara. Yeah, I couldn't wait to get in on the campaign and try that COVERGIRL LashBlast Fusion mascara for myself.  Hey, my eyes are truly an important feature; those eyelashes better look great. I don't use false eyelashes; nope, no way -- nothing false about my eyelashes [well, or me for that matter!]

I wanted to let you know all the players in my mascara lash-off.  We've got Maybelline, the COLOSSAL Volume Express, in that vivid yellow tube.  That's what I had just been using before switching to the COVERGIRL LashBlast Fusion mascara!  The rest of the previous players include: 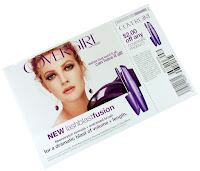 There is just one mascara missing from the previous line-up, and that would be the pink and green tube of Maybelline.  That one fell out of the mix about 6 months ago!

Since it is early in the testing, I will need to follow-up with my adoring public in the near future.  At that time, I will give you my scoop on how much I am enjoying the COVERGIRL LashBlast Fusion mascara!  And, if you live nearby, knock on my door and I'll give you a $2.00 off coupon to try some of this fabulous mascara in the pretty purple tube!  Ah, but you better hurry!  The coupon expires on 9/30/10.

Gotta have it? Well, do not waste a minute ... here it is at Amazon, along with some other great COVERGIRL masacaras!
Posted by Julie Ann Brady at 1:57 PM

Finally caught you in your blog! Really interesting test that you're driving there. I'm always looking for a good mascara - not that I like make up that much but when I go out I like to have at least some mascara and little pencil around my eyes.

Hey there Dom! Well, I was thrilled that BzzAgent finally had a beauty product for me to test. So far, so good. Love the purple color of that tube -- and it has a thick shaft too. Hugs!