Today, December 21, 2016, as I was heading out on a slightly chilly morning, I noticed a Tersa Sphinx Moth perched on my metal stair railing, next to my Florida Room, at the front of my house. I stopped to grab my digital camera to snap a few photos.

I am a very patient, older gal, who had been waiting about six weeks to actually see this very moth. It never flinched as I snapped away at several photos.

Over the past six weeks, I had the privilege to observe the various stages of metamorphosis of this species of moth, from caterpillar to pupa to moth. I am actually waiting to see if a moth emerges from a pupa I have observed for nearly six weeks.

On November 6th, I actually spotted a most unique caterpillar in the corner of my carport, near my side entry door. At first look, it appeared to be a possibly dead millipede ... that was, until I touched it and it moved. Wow, what an amazing insect with those false eyes and the look of a black stinger at the top of its tail end.

When I first saw this caterpillar, I had no idea that it was already preparing to enter the pupa stage. It was lethargic, making me think something might be wrong with it.

Researching the Tersa Sphinx Moth, I learned that a host plant is the Penta. I actually placed that caterpillar out in my front yard, at the base of my periwinkles next to the penta.

When I checked back on November 10th to see how the caterpillar was doing, I noticed it had begun to transform into a pupa. That was when I found a plastic jar in which I placed the pupa. I loosely placed the lid over the top of the jar to keep other critters out. I have checked on the status of the pupa daily, in that jar, since November 10th!

The Tersa Sphinx Moth Pupa on November 30th appeared fairly uniform in width throughout the length of the pupa.

It has been over 40 days that I have observed the Tersa Sphinx Moth in its Pupa stage. Judging by the look of the Pupa today, it seems there is a bit of transformation. Notice the long dark stripe that extends from top to bottom on the pupa? I am wondering if per chance the sighting of the Tersa Sphinx Moth this morning, might signal that the new moth is about to emerge from the pupa stage?

Twenty-four hours later, after the initial sighting of the Tersa Sphinx Moth perched on the stair railing, it is still there! How interesting that the moth looks to have not moved from that spot! 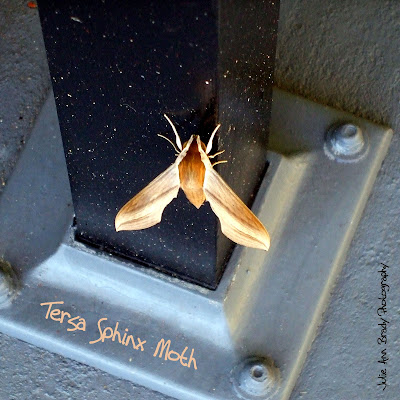 I just took another look at the Tersa Sphinx Moth as it is perched on the railing. I can see a spot of white cobweb-like substance at its tail end. 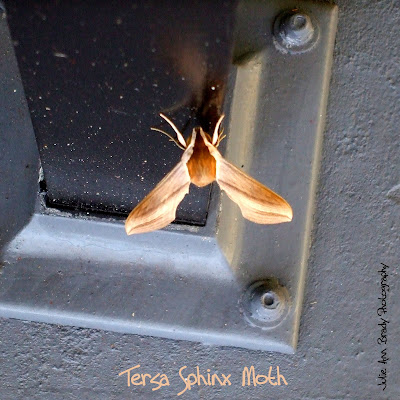 On Monday, December 19th, I pruned to the ground, a pink periwinkle plant that was nearby. That plant actually looked possessed or something as it was totally covered with a white cobweb-like substance.

It looked like the entire plant was moldy. Perhaps I shouldn't have pruned the plant just yet as it may have been in use by the Tersa Sphinx Moth? Checking on the pupa, there is no change from the day before. Waiting!
Posted by Julie Ann Brady at 1:26 PM

It's September 2019 and I have just found a Tersa Sphnix Morh pupa in the weeds next to some Variegated Flax growing next to my Bismark palm. It was exciting because when I picked it up, it moved! I raise Monarch butterflies and have a screened enclosure with a few milkweed. I had to take out the potted white Pentas since it wasn't getting enough sun. I placed the pupa on the diet of a plant and covered with some dry palm fronds.
Since your photo shows a pupa on some mulch, I am wondering if I put too much cover over it? Only a couple of fronds.
I would so enjoy seeing it eclose. And I have a large supply of both Pentas and Periwinkle.
I hope you still monitor this site.

I don't think the pupa is particular about where it is placed, just so that it is a safe place not subject to harsh elements. I have mulch all throughout my front yard garden, so that pupa was near several plants and not in direct sunlight.