Since the middle of May, I had been noticing a pretty white cat, with calico markings, in my backyard. On May 20, 2014, I snapped a photo of her looking like she was definitely pregnant with a litter!

As I watched the white mommy cat come and go daily, I did wonder a number of things, like:
In early 2012, I had seen another white cat in my backyard which surely looks a lot like this white cat. I'm thinking they are definitely related. Check out the white cat in my post on the Stray Cats of Mandarin.
The next photo I have shared of the white mommy cat was taken June 1st. I was reasonably sure she had just delivered her litter. But, I'm not sure of the actual date. What I found odd was the strange behavior of the two male cats when they came near her. Take a look at the next two photos to see what I am talking about! 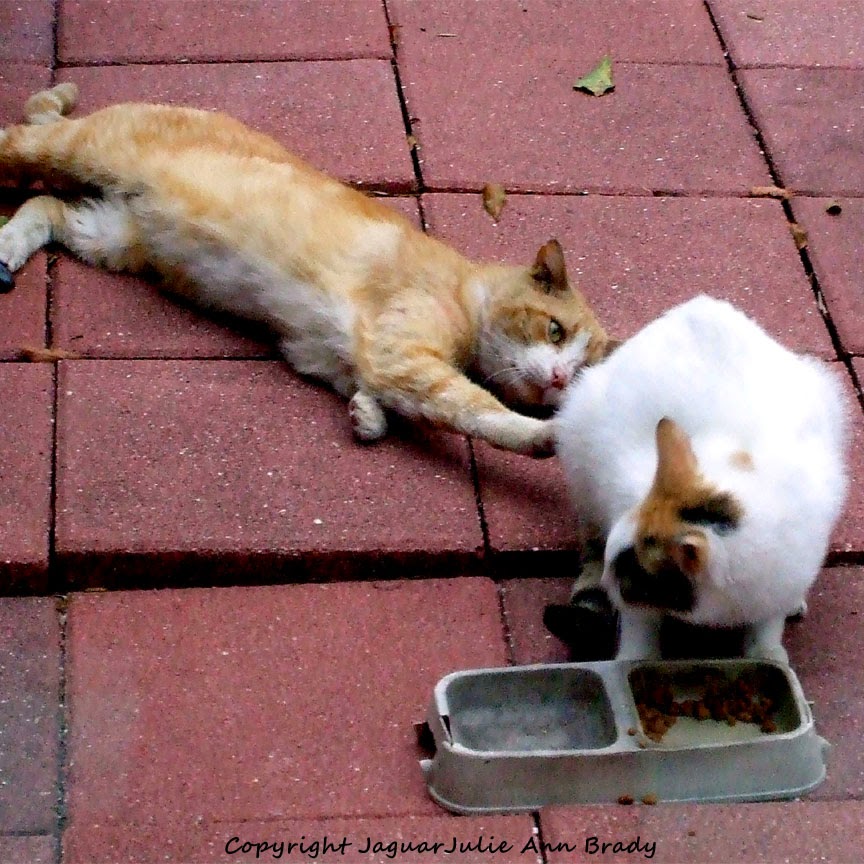 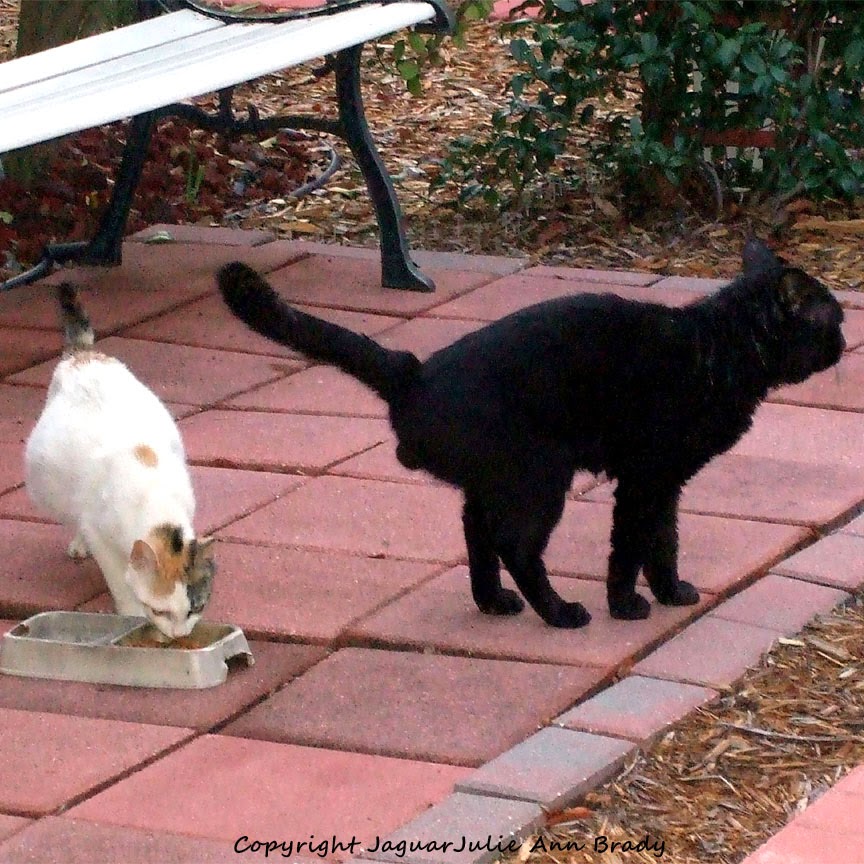 The male orange tabby cat was peering at the behind of the female white cat as she ate. That photo was taken the morning of May 29th. It makes me think she probably had delivered the babies already. The black male cat seems to be peeing on the female white cat! That photo was taken the morning of June 1st. Very odd behavior! I believe these are the two daddies to the litter of six!

At 8:45am on Friday, June 20, 2014, I followed the female white cat after she came by to eat breakfast. She virtually led me directly to the baby kittens that she had stashed in the bushes up against a neighbor's house.

The previous Monday, I was talking with another neighbor who asked if I had seen the white cat. I told her that the white cat was coming by daily to be fed. She said she had her kittens in her bushes at the front of her house. Well, she also told another neighbor and pretty soon mommy cat moved the little kitties. Their location was a mystery for the next few days until Friday morning when I put on my explorer cap and went a-looking.

When I found the six baby kittens, I brought them into my Florida Room. I then started wondering, "what am I going to do with you?" I had researched the local organizations in Jacksonville, Florida. Virtually everybody said the same thing. Do not take baby kittens away from their nursing mother. And, try to be a foster mother to the mommy cat and her babies until they are ready for adoption!

Also, it is important to spay and neuter these cats so as not to add to the pet population. When the time is right, I will be putting the baby kittens up for adoption. That should be when they have reached eight weeks of age. The mommy cat will need to be spayed as well. She looks pretty young to have been a mommy already!

HAVE YOU LOST A CAT?

Could this be YOUR cat? You don't need to be shy about it or embarrassed that I am providing care for your cat. Please, if this is your cat, let me know! She is a beautiful cat with a lovely personality. I am contemplating keeping her after I adopt out her little cuties.

Would you want to adopt one of these baby kittens? In a future blog post, we will profile the little rascals and let you get to know them better. These baby kittens are fortunate that I found them. I've previously managed a feral colony of cats in Deercreek Country Club. I've also nurtured another set of baby kittens from Precious the Cat. After finding good homes for Precious's kittens, I adopted Precious.

Over the course of several years, I worked with First Coast No More Homeless Pets : FCNMHP in Jacksonville, Florida. This organization is a lifesaver helping to spay and neuter cats throughout Northeastern Florida.

If you are interested in adopting one of these cuties, just let me know! You don't need to wait the full eight weeks to contact me. I am doing my best to ensure that these will be the best pets possible. Mommy cat is staying with them and nursing them several times daily. Already I am seeing some pretty precious little personalities emerging for these baby kittens. Perhaps one of them will be your pet?

As you probably can tell, this is a story from June 2014! The mommy cat went into a program with the City of Jacksonville called Wild Whiskers. They wouldn't tell me where she was going, but I was assured that she would do well. Also, all of the six kittens were spayed and/or neutered and put up for adoption in Jacksonville. As it is now several years later, I pray that all are in loving homes and doing well.

You too can adopt a kitten and provide it with a loving home. Your city should have programs that you can check out.
Posted by Julie Ann Brady at 4:48 PM