When it comes to planting sunflowers from seeds, I feel rather like a professional. This is my second sunflower garden from seed. For my first sunflower garden, in February 2013, I picked out the area that I wanted for my garden and started digging. Then in early March, I started with a few packets of Burpee Sunflower Seeds in a Burpee Starting Kit.

This year, for my second sunflower garden, I was doing things just a little bit differently. I opted to wait a little while longer to start! I waited until March 14, 2014 to get started. You see, this year we had some up and down weather and I didn't want my seedlings to face a hard freeze.

The garden plot already had plenty of mulch, but had a few weeds and some errant grass that shot its roots into the soil. I had to first rake away all the mulch and then used my shovel to dig down and pull up all the grass roots.

Next, I opted to try four rows of sunflowers this year as opposed to the three rows of 2013.

I probably would have used a hoe if I had one. Instead, I took my shovel and dragged it down the soil to create a row. A couple of passes got the depth a bit deeper.

In last year's sunflower garden, I used Miracle-Gro Potting Mix. This year, I opted to spend a little less and use Sta-Green Potting Mix. It was approximately three dollars less per bag for the Sta-Green product. 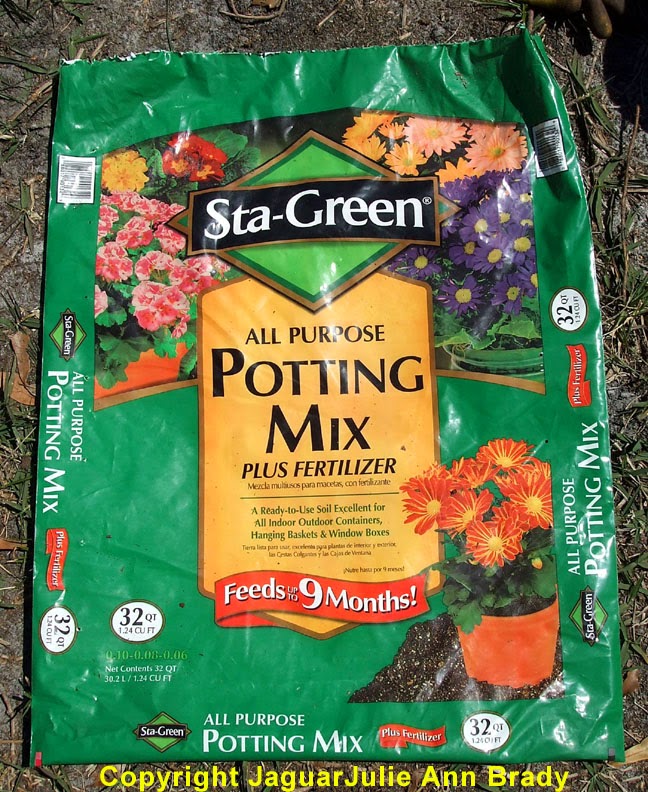 Getting my four rows ready for the sunflower seeds, I added a generous application of Sta-Green Potting Mix in each of the rows.

If I had a second bag of potting mix, I would have added more to each of those rows. Next, came the fun part! It was time to add the sunflower seeds. For 2014, I didn't need to buy Burpee Sunflower Seeds as I had harvested my own seeds from my 2013 garden! There were quite the proliferance of sunflower seeds, even after I started The Sunflower Project. I had more than enough sunflower seeds for this garden.

Take a good look at that photo of the "blank canvas" so to speak! If you followed my sunflower garden in 2013, you got to see quite a different view of that garden plot as the sunflower plants began to grow. Check out the Sunflower Seedlings Emerging in Six Days! Follow me on my 2014 sunflower journey. Get on the blossom watch.
Posted by Julie Ann Brady at 1:51 PM