A beautiful journey to Hollywood with the Traveling Squid!

To celebrate my three year anniversary with Squidoo on March 21, 2009, I launched The Journal of the Traveling Squid, Volume I. By now those of my friends who have followed this journey know that Gordon Hamilton in the U.K. was the first participant in this journey. And, you probably know the story behind my selecting Gordon? We had previously emailed each other to talk about my leaving a package for him at a Southern Spanish hotel. After deciding that might be a risky venture, I opted to mail the traveling squid directly to Gordon. However, I decided to leave a test package for Gordon with Juan, a receptionist at The Hotel Bali, Benalmadena. 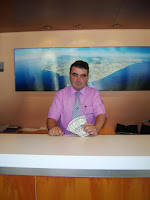 In my package to Gordon, I include five brand new dollar bills -- USD currency. I wanted to send a little help with postage costs. It was from the five dollar bills that Gordon created a remarkable project, The Five Dollar Vacation - A Worldwide Charity Project with a Difference. This is a remarkable lens and an equally remarkable charity journey with a big difference. At Squidoo, a lensmaster can earn a bit of recognition for their remarkable work. It is called the purple star and it is a star that is purple-colored and appears on your work. Well, if you visit Gordon's lens, you will see a beautiful purple star there! 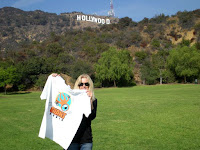 Well, Volume II of The Journal of the Traveling Squid departed Jacksonville, Florida on July 10, 2009, Seth Godin's birthday you all! The project had already spent 6 months in the U.K. so it seemed right to launch the second edition. As of this writing, the journal has visited Gil, Kimberly, Seth, Corey, Susan and now Kim -- Kim Giancaterino. The journal has traveled from Jacksonville, FL to Colorado, Wisconsin, New York, Virginia, Arkansas, and now California! Something beautiful happened in Hollywood with the traveling squid! We owe it all to our dear Kim who created a beautiful tribute and travel lens, The Journal of the Traveling Squid Goes Hollywood.

Oh, and how wonderful to hear that the Hollywood journey earned a coveted purple star when it was newly published? Congratulations to Kim and a big thank you for her beautiful, beautiful lens and journey. It doesn't get any better than this -- to think that the original lens earned a purple star, followed up by two additional purple stars for its goodwill journey around the world.

You'll want to take time to check out these wonderful lensmasters KimGiancaterino and Gordon_Hamilton as they write some truly amazing articles and lenses. And, they are remarkable people too!

P.S. Please be sure to check out my other writings over at Squidoo while you are at it! I'm known consistently as JaguarJulie there. And, if you are convinced that you are ready to put pedal to the meddle and maybe earn a purple star medal for your work, join me on Squidoo! I've helped many a lensmaster to succeed there; to write better lenses and to even earn giant squid status too. Oh, and be sure to check me out on Twitter -- Yep, I'm known as JaguarJulie there! I like being consistent with my messages. ;)
Posted by Julie Ann Brady at 11:17 AM

Thank you, Julie. I'm anxious to find out who the next recipient will be!

Kim, I've sent you the information for our next lensmaster who is participating. Thank you my dear for your marvelous journey with the traveling squid. What a stellar view of Hollywood! You rock. ;)

The journal is on its way to Banning, California!

Thanks again Kim -- in fact I heard this afternoon that Kathy had received The Journal of the Traveling Squid and was already taking it on a journey to Palm Springs! W00t!!! ;)

Palm Springs! That will be fun.

Well Kim, I heard from Kathy today and she asked about washing that Giant Squid t-shirt as the Palm Spring desert was windy and dusty -- and made the shirt look like it might need a cleaning! Nothing like picking up a bit of the place that you're visiting! ;)

Update! Yet another lens in the saga of the traveling squid has earned that coveted purple star! Congratulations to Kathy McGraw for her lens on the traveling squid in the Southern California Desert Communities of Palm Springs. That was one remarkable visit! Well done Kathy. ;)